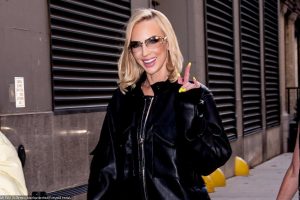 While the real estate agent won’t be in attendance at the upcoming award-giving event, she and her co-star Chrishell Stause are up for the Best Fight award.

AceShowbiz -Fans seemingly will not see Christine Quinn attending the 2022 MTV Movie & TV Awards: Unscripted, which is set to be held on Sunday, June 8. According to a new report, the “Selling Sunset” star is not invited to this year’s ceremony even though she scores a nomination.

” ‘Selling Sunset’ only got a certain number of tickets,” the source says. “She’s really shocked and knows that they are sending a stern message by excluding her.”

While she won’t be in attendance at the event, Christine and her co-star Chrishell Stause are up for the Best Fight award. Additionally, “Selling Sunset” is nominated for the Best Docu-Reality Series category.

The snub arrived after Christine caused major drama in season 5 of the Netflix series. In the final episode of the season, Emma accused Christine of bribing one of her clients $5,000 to stop working with her. Quinn denied the allegation, saying, “There’s absolutely no truth to this. I don’t know why Emma is once again trying to make me look bad and stir the pot and make up lies about me.”

Emma, however, insisted that “it’s a hundred percent facts.” She added, “I don’t understand the lies and everything else. I don’t resonate with that. That’s not who I am. That’s not how I was raised.”

Following the drama, Christine’s fate in season 6 of “Selling Sunset” is currently in limbo. Jason Oppenheim previously said at the reunion that the real estate agent, who terminated her contract with Oppenheim Group, was no longer welcomed at Oppenheim Group.