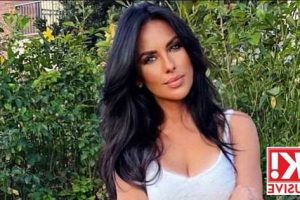 Selling Sunset newcomer Vanessa Villela has revealed that she’s been diagnosed with long covid after contracting the virus over the summer.

Vanessa received the news of her positive test after returning home from holidaying in Mexico just before season five of the hit Netflix show began filming.

As a result of her illness, the 43 year old missed out on five weeks of filming as production had to continue without her.

Discussing her illness and how “challenging” it was, Vanessa told OK!: “It was very unfortunate because I lost five weeks of filming.”

“I’m much better now; thank God I have a very amazing doctor,” she added.

“I have something called long covid. I don’t have the virus anymore, but the side effects of the virus are still affecting my body.

“Some people get affected in the lungs, some people by the stomach, or people like me — I got inflammation in the brain. I had a lot of hormonal imbalances and Vitamin D deficiencies which can sound quite easy, but it’s not that great either.

"(My doctor) was telling me that’s maybe why I got it so bad because I had a Vitamin D deficiency beforehand.”

Despite still enduring the side effects of covid, Vanessa said she’s still able to live a “normal life” and is able to work as usual, but those first five weeks for her were “very challenging”.

Vanessa went on to credit the doctor provided by Selling Sunset, who found out that she had covid, for being the reason that she didn’t have to go to hospital when she became ill.

“I’m incredibly grateful for him because he’s the reason we (Vanessa and her boyfriend) didn’t end up going to the hospital,” she said.

“I was starting to have an infection in the lungs and it was very close to becoming pneumonia, so that’s when you have to go to hospital, but he nailed the antibiotics on time.”

While she missed the first few weeks of filming Selling Sunset’s fifth season, Vanessa promised that there would be “more drama” for viewers to look forward to, and even teased that her boyfriend — who isn’t in the public eye — may make an appearance on the next season.

For updates on all your favourite celebs and TV shows, sign up to our daily newsletter here.