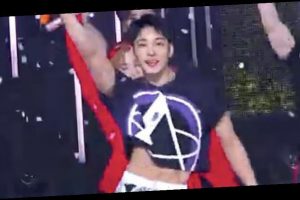 The 23-year-old member of the South Korean boy band SEVENTEEN shot up the Twitter Trending charts while performing their song “Left & Right” on Inkigayo on Sunday (July 5).

PHOTOS: Check out the latest pics of SEVENTEEN

According to the SEVENTEEN superstar after the show during a live chat, the group’s leader Choi Seungcheol (also known as S.Coups) was the one who suggested he crop his shirt because he has a “built” body – so he did!

“Left & Right” is featured on the group’s latest mini-album, released on June 22.

Watch SEVENTEEN‘s Inkigayo performance, as well as the Wonhoo fancam inside…