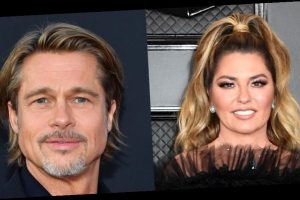 It’s Brad Pitt‘s 57th birthday and Shania Twain‘s tweet might be the best birthday message he’s going to receive today from the internet.

If you didn’t know, Shania gives Brad a shout-out in her classic song “That Don’t Impress Me Much.”

Well, it seems Brad is impressing Shania, but just on his birthday.

She tweeted, “Happy Birthday to Brad Pitt, I’ll make an exception for today.” She added the kissing face emoji to the end of the tweet.

Brad is currently working on his upcoming movie Bullet Train and an exciting music star just joined the cast of the already star-studded film.

END_OF_DOCUMENT_TOKEN_TO_BE_REPLACED

END_OF_DOCUMENT_TOKEN_TO_BE_REPLACED
We and our partners use cookies on this site to improve our service, perform analytics, personalize advertising, measure advertising performance, and remember website preferences.Ok