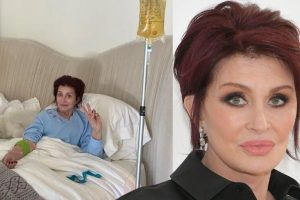 Sharon Osbourne in tears after Ozzy is diagnosed with Covid-19

Sharon Osbourne, 62, took to Instagram yesterday to share a picture of herself in bed attached to an intravenous drip after she revealed she had caught COVID-19 from her husband, Ozzy. The TalkTV host took to Instagram this evening to update her fans on how she is feeling after previously sparking much concern.

Sharon took to Instagram this evening to share a video after worrying many when she announced she had contracted Covid from her husband.

In view of her 1.1 million followers she shared a video of Amsterdan’s Tulips Tour, where the public can buy tickets to view acres of colourful tulips.

She captioned the post: “Still not feeling great, but manifesting this @tuliptoursholland.”

Many social media users took to the posts comments to send the TV personality good wishes and better health.

Amandakloots said: “So glad you are feeling a little better.”

Misfitsofmusic added: “Thoughts and prayers are with you and the family.”

KeithBerry70 commented: “I hope you feel better soon Sharon! I just had it and feel a lot better. Time to sit on the beach!”

This comes after Sharon revealed she had caught Covid after having to fly back to Los Angeles from London to look after Ozzy after he had contracted the virus.

In her social media snap yesterday, Sharon went make-up free as she wore a blue T-shirt and made the peace sign with her left hand.

The sleeve of her top on her right arm was rolled up and the intravenous drip in her arm could be seen secured by green tape.

She was surrounded by five TV remote controls and three of her dogs on her bed as well as a mobile phone, laptop and magazine as she tried to keep busy.

Alongside the snap, she simply wrote “Covid” accompanied by angry face emojis.

Scientists discovered the use of a hypertonic solution of sodium chloride at 1.1 per cent reduced viral replication by 88 per cent in tests involving infected lung cells conducted by researchers at the University of São Paulo.

The TV personality broke down in tears last week after confirming she was flying back to the United States to help her rocker husband.

Speaking on her new TalkTV show, The Talk, from LA, Sharon told her co-star Jeremy Kyle that Ozzy is now doing well but that she and daughter Kelly have sadly been struck down with the virus.

“But I’ve got some news to share. My daughter Kelly has it, I have it and the entire household has it now.”

When asked if Ozzy will now be looking after his wife, Sharon laughed and said: “Maybe, we’ll see. I feel OK actually.”

On Sunday, Sharon and Ozzy’s son Jack shared a video of his father FaceTiming their dogs and said he was doing OK.

He wrote: “Dad is on the mend and back to FaceTiming the dogs. Thank you for all the love & support!”