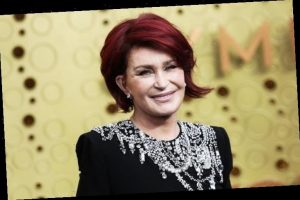 The Osbourne matriarch is overwhelmed with emotions as friends Sara Gilbert and Cyndi Lauper as well as husband Ozzy Osbourne surprise her on TV on her birthday.

AceShowbiz –Sharon Osbourne was reduced to tears on Friday (09Oct20) after she was reunited with pal Sara Gilbert on TV as a birthday surprise.

The rock matriarch turned 68 and was given the VIP treatment on the birthday episode of her U.S. daytime show “The Talk“, on which she was celebrated with a series of special messages from close friends and family.

Among the well wishers was Gilbert, who created “The Talk” and previously served as a co-host.

“Happy birthday Sharon, I love you so much,” the “Roseanne” star began her video offering. “I’m so sad I can’t spend the day with you and tell you in person, but I’m thinking about you, I miss you, I can’t wait until we can hang out again.”

As Sharon smiled at the kind words, Gilbert appeared in person onset, causing the birthday girl to burst into tears.

She was also treated to a sweet recording from Sharon’s “boyfriend” – Gilbert’s five-year-old son, Rhodes.

“You are just the most amazing, magnetic, tremendous person…,” the actress shared after her boy’s footage aired.

“I am beyond lucky that you are in my life.”

Sharon’s husband, rocker Ozzy Osbourne, also called into The Talk to wish her the “best day” while pop veteran Cyndi Lauper serenaded her old pal virtually with a cupcake and a candle.

Lauper also revealed she once tried to hire Sharon for her own management team. “I always admired her,” the singer said. “In fact, I wanted her to manage me at one point, because she was the only woman manager (at the time), and I wanted to work with women. That didn’t work out, but then we worked together on The (Celebrity) Apprentice (in 2009)…”

Sharon’s birthday celebrations were wrapped up on camera with cake and Champagne.

END_OF_DOCUMENT_TOKEN_TO_BE_REPLACED

END_OF_DOCUMENT_TOKEN_TO_BE_REPLACED
We and our partners use cookies on this site to improve our service, perform analytics, personalize advertising, measure advertising performance, and remember website preferences.Ok