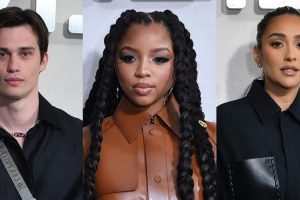 The actors were among quite a few young celebs in attendance at the presentation on the first day of New York Fashion Week.

“What an honor to be with @fendi for their #fendibaguette collection,” Nicholas shared on Instagram.

Later that night, Shay was seen attending the Harper’s Bazaar Global Icons and Bloomingdale’s 150th Anniversary Party in the city, alongside many celebs. Check out the photos!