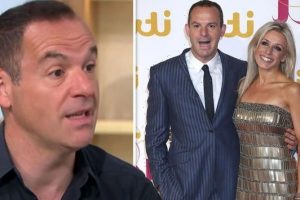 Money Saving Expert Martin Lewis, 49, has appeared to spark a parenting disagreement with his wife Lara Lewington, 42, over when young people should be allowed to drink coffee for the first time. The couple, who have been married since 2009, share a daughter named Sapphire Susan Lewis, who was born in 2012.

It comes after The Martin Lewis Money Show host took to Twitter to ask his 1.2 million followers for their opinions on the subject.

Martin asked: “How old were you when you first started drinking coffee (if you do).

“Mini MSE was asking what age people do – I know I drank it in my teens, but not sure when I had my first.

Martin’s other half Lara was one of the first to take to the comments section to warn him that their daughter is “not allowed any” coffee.

Lara wrote back alongside a crying with laughter emoji: “I was 22, she’s not allowed any!”

Martin’s fans then weighed in on Lara’s views, with Twitter user Compost Pete replying: “Why not?  Does she get tea?  If so, what’s the difference, and again, if not – why not?  (Not criticising, just genuinly curious.)”

Sam Downie asked: “But what about Tea as that has caffeine in it too ?”

Ciscokid added: “Not even Decaf ??”

Martin has not yet responded to Lara’s concerns.

The star penned: “Really interesting many much older than I thought – seems to be around the cusp of people’s 20s on average.”

Lara, who Martin refers to as Mrs Money Saving Expert or MMSE for short, is also a TV presenter.

She was previously a weather presenter and showbiz correspondent for Channel Five.

The pair have made some changes to their habits since welcoming their daughter, as they used to hire a motorbike while on holiday, which Lara has since put a stop to.

“We would occasionally hire a motorbike when we were on holiday and we’d sit there and we’d sing this song in the sun, on the back of a moped, both wearing helmets, being safe, I should note,” Martin said on Desert Island Discs in June last year.

He added: “When we started going out, in the days when she would allow me to do this, I’m banned now since we had a child, I’m not allowed to ride a motorbike anymore.”

After the birth of their baby girl, Martin wrote a blog dedicated to his newborn daughter.

“Her name is Sapphire Susan Lewis and while she weighs a wee 6lb 6oz, her weight in joy is immeasurable,” Martin penned.

“Last night was her first one at home and it was quite exhausting (I think she’s operating in a US time zone for some reason), though worth every second.”