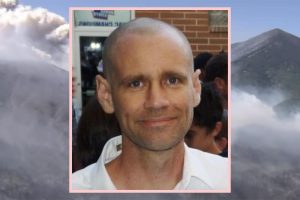 A missing persons case just went from cold to hot… but is the new evidence that was found two states away actually encouraging? Or even scarier?

David Alford was last seen in Idaho back in 2014. He was headed out on a hike, says his big sister, Analee Reseigh — who was the last known person to see him before he vanished. She dropped him off on the Interstate near Boise, as she recalled:

“He stayed with us off and on through the years, and he’d been staying in Boise, and he wanted to head south. So, I dropped him off near the interstate because he was planning to hitchhike down south to Arizona, and then I thought he was headed to Mexico after that. He had a sign that said Arizona on one side and Utah on one side.”

Then he just… vanished. Reseigh explained:

“He’s a spiritual person, and so I think he had planned to cut off communication, but we were all very surprised when we didn’t hear from him a few months later, especially around the holidays.”

Weeks became years, and no one heard anything from him — not until last month. On July 25 firefighters in Arizona were dealing with the so-called Dragon Fire on the North Rim of the Grand Canyon when they found a backpack. About 700 miles away from his sister’s home in Boise.

“As work was being done to prepare containment lines around that fire, one of the fire crews preparing the road discovered a backpack in an area where visitors don’t really travel; it’s not a popular visitor area whatsoever.”

So it was a strange spot to find a bag — with no one else around. Investigating it, they found very quickly who it belonged to. David Alford’s ID was still there, as his sis was subsequently informed:

“It had been gotten into by packrats; it had been a long time. Passport, social security card, and family phone numbers were there. I don’t think he left the backpack, honestly.”

It makes sense if he had a choice he would have taken the bag with him. So what happened? Is he still in the area? If so… that’s probably bad news. Like we said, this is the middle of nowhere. And if she’s right and he didn’t willingly part with the bag? That’s even scarier.

Search and rescue crews began searching the area, but “weren’t able to go very far in distance” according to Baird:

“They were able to cover perhaps 370 acres over the period of a couple days and very challenging terrain, very overgrown brush. It’s a remote area, it’s higher in elevation between 8,000 and 9,000 feet. This particular area is only accessible via a 4-wheel drive road. It’s known as the W1 road, which is more or less an access road which gets people into the inner basin. Not a lot of people go out there though.”

It’s unclear if there was foul play involved. But Analee is convinced someone knows something. She said of her brother:

“He got to the Grand Canyon, obviously, and he didn’t walk. So we would just like to if somebody out there gave him a ride; we’d love to talk to that person to hopefully get more information that’s really our goal right now.”

David was 5′ 8″, 140 lbs at the time of his disappearance. He has blue eyes and brown hair, which was shaved close the last time his sister saw him. He would be 44 years old now. See more on the case (below):

If you have any information on David Alford’s whereabouts, please call the Boise police at 208-570-6000.