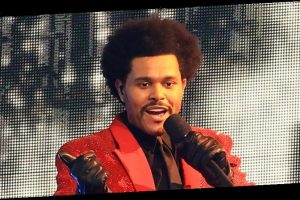 The Weeknd performance at the 2021 Super Bowl is the subject of a new documentary!

Showtime has announced that it will release THE SHOW, a 90-minute behind-the-scenes look at the making of the Super Bowl Halftime Show. While no release date has been set, the documentary is expected to air later this year.

Pepsi’s VP of Marketing Todd Kaplan said in a statement, “With our new documentary coming to Showtime, we are taking fans on the emotional and thrilling journey of what it takes to make the biggest show of the year – with the added complexity of doing so amidst a global pandemic. With Jesse Collins and a number of super-talented creatives at the helm, THE SHOW chronicles all the drama and hard work that goes into successfully pulling off a show of this magnitude.”

The film is directed by award-winning filmmaker Nadia Hallgren, who is known for her work on the Emmy-nominated documentary Becoming about Michelle Obama.

Click here to see The Weeknd‘s reaction to his Super Bowl performance!