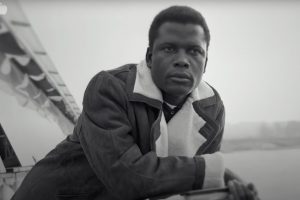 “It’s not easy being the first when you have to represent the entire race,” Spike Lee explains during the first official trailer for Reginald Hudlin’s Sidney, the Apple TV+ documentary chronicling the life and legacy of filmmaker and activist Sidney Poitier. Out Sept. 23, the film uses archival footage and candid interviews to strikingly capture Poitier’s positioning as an essential cultural thread between Hollywood and the civil rights movement.

Poiter, who died this year at age 94, blazed a trail followed by generations of Black actors and filmmakers, having been the first Black man to win Best Actor at the Oscars for his performance in 1963’s Lilies of the Field. “There was a habit in Hollywood of utilizing black acts in the most disrespectful way,” he says in a voiceover. “I said, ‘I cannot play that.’” In the trailer, a highlights reel of the icon’s most notable performances is used to depict his uncompromising demand for respect in an industry that would rather he have played a caricature.

“It was the first time I’d seen a Black man assert his power,” Halle Berry remembers of encountering Poitier for the first time. The actor’s legacy is lauded in the trailer by Berry, Lee, Morgan Freeman, Denzel Washington, Robert Redford, Lenny Kravitz, Barbra Streisand, and Oprah Winfrey, who serves as producer on the film.

Poitier’s rise as a Hollywood star skyrocketed during the height of the civil rights era. He had first appeared in mid-Fifties films like 1955’s Blackboard Jungle and 1958’s The Defiant Ones, which earned him a nod for Best Actor at the Oscars, making him the first Black actor to receive the nomination. Poitier also directed multiple films, wrote three books, and played a visible role in the civil rights movement, marching alongside protesters at Martin Luther King Jr.’s March on Washington in 1963 and traveling the South with fellow activist and actor Harry Belafonte.

“My life has had more than a few wonderful, indescribable turns,” Poitier says at the end of the trailer. “And I have lived them.”