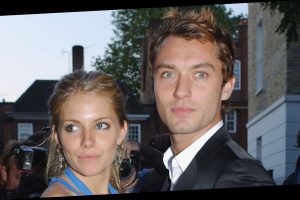 Sienna Miller is opening up about the “public heartbreak” that she experienced after her then-fiance Jude Law‘s affair with his nanny became public.

The actor cheated on Sienna with his children’s nanny back in 2005 and it put her in the public eye in a way she had never experienced before. When the story went public, she was starring in the play As You Like It on London’s West End.

“That was one of the most challenging moments I hope I’ll ever have to experience,” Sienna said in a new interview with The Daily Beast. “Because with that level of public heartbreak, to have to get out of a bed let alone stand in front of 800 people every night, it’s just the last thing you want to do.”

END_OF_DOCUMENT_TOKEN_TO_BE_REPLACED

END_OF_DOCUMENT_TOKEN_TO_BE_REPLACED
We and our partners use cookies on this site to improve our service, perform analytics, personalize advertising, measure advertising performance, and remember website preferences.Ok