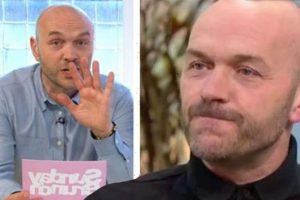 Not only is Simon Rimmer, 58, the well known face of Channel 4’s Sunday Brunch but he’s also a true master of comedy. The chef recently admitted that he enjoys “winding people up”, in a cheeky admission following backlash from his pulled pork recipe that he continues to claim he invented on the show.

After he created his own rendition of the barbecue dish a few years back, fans went wild for it and he’s been jokingly claiming ever since that he is the founder of the recipe.

Obviously his protests are all in jest but nevertheless, it doesn’t stop hundreds of viewers retaliating to them.

While featuring on Kate Thornton’s White Wine Question Time podcast, Simon recalled the reaction he continues to recieve on social media to this day.

“So what happened is, I cooked pulled pork on Sunday Brunch and Tim [Lovejoy] just went crazy for it!” he told Kate.

“It was one of those moments in time were all our ducks were in a row and I think it became the most downloaded recipe on Channel 4, including Jamie Oliver, Gordon Ramsey.

“It was one of those things everyone wanted to cook!”

He giggled as he went on: “Then six months later, that low and slow thing really took off, so we just started saying, ‘My invention’, and it’s great because whenever it’s mentioned it always gets people angry.”

The pair laughed as Simon put on a high-pitched voice to mimic his critics’ complaints: “‘It’s been around for years’, ‘It was invented in the states’…

“My favourite one when someone took me to task on it, was ‘Pulled pork has been around as long as there’s been pigs in the British isles.’

“So I said, ‘But my grandad invented pigs.'”

Kate burst out laughing at the blatant joke, as Simon shrugged.

“I deliberately take photos of menus with pulled pork on them when I’m away and go, ‘Oh my God, my invention has gone all over the world!'” he smirked, sucking up the hatred.

He added: “As if anybody could believe that I really invented pulled pork!”

Kate chimed: “But you stoke the myth!”

“You continue to feed the beast,” she laughed.

“It’s good that you embrace it in the way that you do!”

Sunday Brunch continues today at 9:30am on Channel 4.