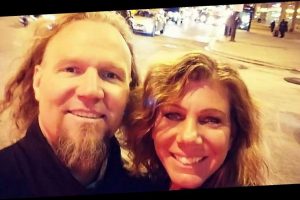 Making it through. Meri Brown and husband Kody Brown‘s relationship woes have recently come to a head during season 14 of Sister Wives — but they’re not giving up on each other.

During a February 28 episode, Meri, 50, told a therapist, “The relationship between he and I, it’s gone. It’s dead. It’s over.” However, that’s not exactly what she meant.

“That was a little bit taken out of context,” Meri, who married Kody, 52, in 1990, told Us Weekly exclusively in a new interview. “It was not me saying, ‘This is over, I’m done.’ What it was, was me saying where we were and what had happened was done and over, and now we need to figure out a new normal for us [and] figure us out.”

She added that they’ve had a bit of a roller coaster relationship, which is sometimes at a high and other times at a low.

As for where they stand today, Meri said she’s “at peace,” but there are “always improvements to be made” overall. She noted, “Any improvement that we can make on the relationship between me and him, I think it would be great.”

Meri, who shares daughter Mariah, 25, with Kody, also shed light on Kody’s comments about divorce. He’s voiced many times that while he would never file, he has made it clear to all four of his wives that they can go at any time.

“In my very, very dark time in my life that has been documented on the show, about six years ago, I went through a time where I was considering what I wanted to do,” she told Us. “I was considering all options and what that would look like. And I also knew that it is not safe for me — or anybody for that matter but I can only speak to myself — to make a decision in a dark time. When you are in a place of pain or hurt or sorrow or whatever, it is not the time to make a decision.”