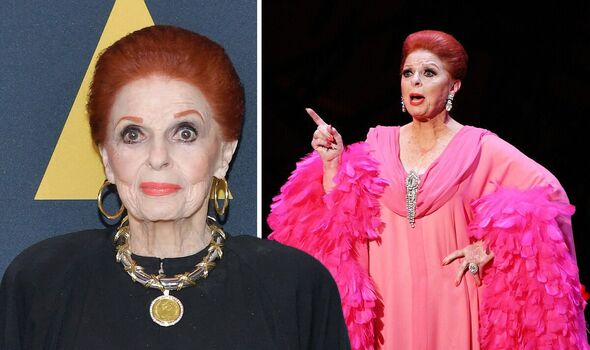 Carol Cooke, who has also been dubbed as Lucille Ball’s protégé, died on Wednesday after decades of roles on the stage and screen. Her husband, Tom Troupe, announced Carole’s death just three days before her 99th birthday.

He said Carole’s cause of death was heart failure, as reported by The Hollywood Reporter.

She is perhaps best known for her role as Grandma Helen in the 1984 movie Sixteen Candles and as Don Knotts’ wife Bessie Limpet in 1964’s The Incredible Mr Limpet.

It is understood that they remained close friends until Lucille’s death in 1989.

Carole also had a host of appearances in titles including American Gigolo, Greys Anatomy and Palm Springs Weekend.

Her standout roles on stage included as Maggie Jones in the Tony Award-winning musical 42nd Street, as well as Blanche Dailey in Romantic Comedy.

Tributes have been flooding in from Carole’s famous friends and fans.

Mia Farrow tweeted: “Today we lost one of the greats. Carole Cook was making people laugh since the 1950s on TV, in movies and on stage.

“We became friends when we were in a Broadway play for a full year. At 98 that huge heart of hers just gave up. I love you Carole.”

Comedian Scott Nevins echoed: “So sad to hear that we lost the great Carole Cook today. She was magnificent!!!

“I was honored to have had the chance to work alongside her, and grateful that she let me gush about how impactful 42nd Street was to me as a child seeing my first Broadway show. Rest now, Carole.”

And her A Very Sordid Wedding co-star, Emerson Collins, added: “Carole Cook was grand ol’ broad in the biggest and best sense of the word.

“Carole had the sharpest of tongues and a twinkle in her eye at all times. A true star and the life of every party.

“She wrung every drop from life and flung it around just to be sure. So much love to Tom.”