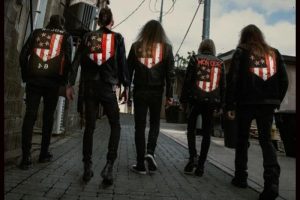 Skid Row recently released the second single from their upcoming album The Gang’s All Here and an accompanying music video.

“Tear It Down” comes four months after the metal band released the title track.

“‘Tear It Down’ is about breaking down barriers. Because coexisting isn’t about building walls; it’s about getting rid of them,” according to Skid Row bassist and main songwriter Rachel Bolan.

The Gang’s All Here, which is scheduled for release on October 14, introduces 34-year-old Erik Grönwall from the Swedish band H.E.A.T. as Skid Row’s new singer.

Bolan said Skid Row had started thinking about Gronwall several years ago when they toured with H.E.A.T. in Europe.