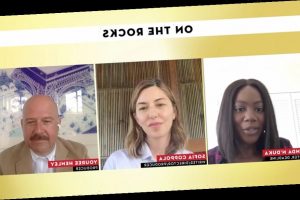 Following the tension heavy-2017 drama The Beguiled, writer-director Sofia Coppola said she was ready to shift the tone with her latest feature, Apple TV+’s On the Rocks. “I do find that after I’d done a film that I like to change,” says the Oscar-winning filmmaker, speaking about the choice to go with a “fun and playful” tone for the comedy starring Rashida Jones and Bill Murray.

“I was also missing that kind of sophisticated comedy romp that I’ve never done, but I love those kinds of movies,” she adds during the film’s presentation at Deadline’s Contenders Film awards-season event.

Mining from her own personal experiences and upbringing, Coppola presents a father-daughter duo who reconnect after Jones’ Laura suspects her husband of being unfaithful. Murray’s character Felix, a playboy himself, insists that the two investigate her husband by tailing him around the city until they ultimately find that at the heart of their journey lies their own relationship.

“When I finally read it, I was really excited about it,” Coppola’s producing partner Youree Henley says. “There was a lot more dialogue, but I loved the dialogue. I loved the relationship.”

While Coppola stepped out into different territory for this film, she did so with a familiar face, reteaming with Murray almost 17 years after making a splash with their 2003 dramedy Lost in Translation.

“I never thought I could really work with Bill again because people loved him in Lost In Translation,” Coppola says. “I didn’t want to disappoint people that we couldn’t do that again.”

Putting those concerns aside, “I just thought that Bill would bring so much to this character in the story and that I should just get over my worries,” she says. ” e’s such a national treasure that I would just love to work with him again in my life. He’s in a different stage and I’ve never seen him play a father character before. So, I was really happy that he agreed to do this.”

Check back for the panel video.