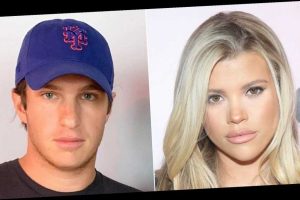 Us Weekly broke the news on Monday, October 19, with a source saying, “They’re trying not to make a big deal about their relationship or about how serious it is. But they are definitely seeing each other.”

Richie, 22, was spotted with Morton, 27, on Saturday, October 17, during a dinner date at Nobu in Malibu. During the outing, she wore an all-black ensemble with a leather jacket, while her new beau rocked a tan coat, a white T-shirt and dark pants. They arrived at the hot spot in matching black face masks amid the coronavirus pandemic.

The model started dating Disick, 37, in 2017 after his split from Kourtney Kardashian, with whom he shares three children: Mason, 10, Penelope, 8, and Reign, 5. Richie and the Talentless founder were on and off for years before breaking up for good in August.

“Sofia really pushed to make things work between them after they initially broke up, but Scott officially called it off recently, and they are no longer speaking,” a source exclusively told Us at the time. “Friends attributed their 15-year age difference becoming an issue. He’s in a very much different place in his life, really focused on a more quiet lifestyle, his kids and his investment businesses, and Sofia … is really still trying to figure what she wants to do, which drove them apart over time.”

A second insider revealed that the aspiring actress’ family, including dad Lionel Richie and sister Nicole Richie, thinks “she is way better off without” Disick in her life.

“They have been advising her to do her own thing, especially during the quarantine,” the second insider added. “She has been separating herself from the equation, and it has been the healthy thing for her and her family.”

In addition, Sofia unfollowed the real estate developer and Kardashian, 41, on Instagram after their split.

Scroll down to find out more about her new man!

He’s a College Graduate
Morton attended New York University from 2011 to 2015. He has a degree in business and minored in art history.

Matcha Changed His Life
While at NYU, Morton’s friend Conrad Sandelman brought back matcha powder from a trip to Japan and gave it to him to try. Morton told Toolsy in February that when he first had the drink, he was on a “10 Red Bulls a day” diet and needed a change. After 30 days of drinking matcha, the friends came up with the idea of bringing it stateside as they cofounded Cha Cha Matcha.

“There was no community around the product and there was a stigma around tea versus coffee. Somehow coffee had become this cool trendy thing, but just tea wasn’t,” Morton explained. “We wanted to change that stigma by building a fun community around a product that promotes mindfulness, mental clarity, focus and wellness. That’s when the idea to open up a store came about. We thought that if we opened up a store it could be a hub where we could get data from customers, get people excited about the product and then create products that we would scale and sell throughout the world.”

Celeb CEOs: Stars Who Run Their Own Businesses

The Food Industry Is in His Blood
Matthew is the fourth generation in his family to work in the food and beverage industry. His father founded Hard Rock Café while his grandfather Arnie Morton started Morton’s Steakhouse. His late brother, Harry Morton, founded Pink Taco and owned the Viper Room.

Matthew told Toolsy that his family’s legacy has “definitely been an inspiration” throughout his career. “It’s always been a dream of mine to have a hotel or restaurant,” he explained. “Food and beverage was one of the many things I was interested in growing up.”

He Was Previously Linked to a Model With Ties to Disick
Matthew was spotted with Megan Blake Irwin several times in 2016, sparking rumors that they were an item. The Australia native previously romanced Disick and Skeet Ulrich. She reunited with the Flip It Like Disick star on Thursday, October 15, for a date in West Hollywood after his split from Sofia.

END_OF_DOCUMENT_TOKEN_TO_BE_REPLACED

END_OF_DOCUMENT_TOKEN_TO_BE_REPLACED
We and our partners use cookies on this site to improve our service, perform analytics, personalize advertising, measure advertising performance, and remember website preferences.Ok