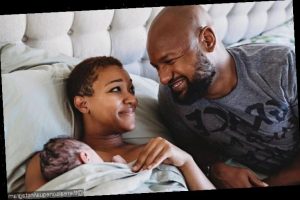 The ‘Star Trek: Discovery’ actress and her actor husband, Kenric Green, have become proud parents of two after the arrival of a daughter named Saraiyah Chaunte Green in mid-July.

The 35 year old and her husband, her former “The Walking Dead” co-star Kenric Green, celebrated the arrival of a daughter named Saraiyah Chaunte Green with a water birth at their home on 19 July, and the new mum broke the news to fans on Instagram on Tuesday, July 28.

Alongside a series of photos of the growing family, Sonequa wrote, “We welcomed our sweet baby girl last Sunday, July 19th at 8:32 in the morning.”

“It was a profoundly beautiful home birth, and now both of our children have been born in the water. We never felt that anything was missing, but now that she’s here, we feel a perfect sense of completeness.”

She continued, “Her name is Saraiyah Chaunte Green, she’s got Mommy’s initials and Mommy’s middle name. She’s utterly perfect, just like her brother. Thanks be to Yeshua (Jesus), she’s the final piece to our Love-given puzzle.”