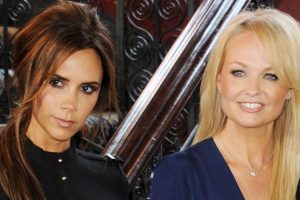 The Spice Girls could be performing at Glastonbury as Emma Bunton has revealed that bandmate Victoria Beckham is "up for it".

Speaking on Keith Lemon's podcast Back Then When, Emma, 46, revealed that if contacted the band would love to headline for the festival in Somerset's Worthy Farm.

Emma explained that although she doesn't know where the rumour came from she's hoping it's true and that someone will contact them soon.

Stating that Victoria is onboard with the idea also, she added: "I don’t know! I think it would be fab. And I have spoken to Victoria about it too. And I think she'd be up for Glasto."

The hit 90s girl group have been doing their solo ventures since their split in 2001.

While the members have performed together on some occasions, Victoria has been absent for a few.

A spokesperson for the fashion designer told Mail Online in 2013 that she wouldn't be performing with her former bandmates.

They said: "Victoria has made no secret of the fact her singing days are over, with a hugely successful business and a growing family, she loved her time as a Spice Girl and will always wish the other girls well in whatever they choose to do."

The last time Victoria performed with her bandmates was in 2012 for the closing ceremony of the London Olympics.

It's been said that Posh Spice didn't want to ruin her reputation as a fashion designer.

She was also reportedly fed up of the continuous scrutiny of her singing voice.

However, a source told Mail Online that now that she's older and close to 50, she doesn't care about what anyone has to say about her.

Spice Girls hit the scene in 1996 with their debut single Wannabe, which topped the charts in over 30 countries.

Despite the band going their separate ways, the ladies have remained close and supportive of one another.