Home » Celebrities » Stacey Solomon hits back at cruel troll who shamed her for ‘letting’ son Rex, one, eat lipstick 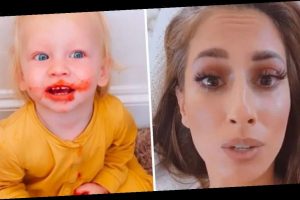 Stacey Solomon has hilariously hit back at a troll who felt the need to criticise her parenting skills.

The 30 year old is known for her honest accounts of motherhood and regularly shares updates on her three children Zachary, 12, Leighton, eight, and one year old Rex, as well as her boyfriend Joe Swash, 38, across social media.

However, occasionally the outspoken Loose Women panelist comes across a mummy-shamer who she just can't help but clap back at.

Stacey, who recently went on a social media break after busting into tears over her youngest child, had taken to her Instagram stories earlier in the day to show that Rex had picked up a shade of her red lipstick and smothered it all over his face.

The mum-of-three shared an adorable snap of her youngest child looking guilty after being caught literally red-handed while the lipstick sat by his feet.

She wrote over it: "Me: Did you eat mummy's lipstick? Rex: [hand pointing down emoji]," before adding: "Just trying to get ready," alongside three laughing emojis.

Later in the day, the brunette beauty received a message from a troll who told her she shouldn't be "letting" Rex eat her make up.

Clearly annoyed by the comment, Stacey quipped: "To the lovely Susan who message me just to say you really shouldn't let your child eat lipstick, thank you so much, 'cause I genuinely was going to pick out a few shades for his lunch!"

Stacey, who recently clashed with Joe while attempting to cut his hair, wrote over the clip: "Thank you Susan… That was a close one," with a laughing emoji and a white heart emoji.

She then proceeded to make Rex his sandwiches for lunch, which were all shaped as lipsticks in different shades, including marmalade kisses, thousand island pout and jam smooches.

Serving the plate to her little bundle of joy, the doting mum confessed it didn't seem like he loved the design.

Stacey wrote: "He wasn't too impressed with his lipstick sandwiches," followed by a sandwich emoji and a laughing emoji.

She added: "He would have rathered the plate of actual lipsticks," [sic] alongside a lipstick emoji.

This isn't the first time the TV personality has hit back at horrible trolls though as she recently slammed a Susan for saying she looked like a horse because of the size of her teeth.

Taking to her social media, the star shared several comments people had been writing about her, including one that said: “Last time I saw gnashers like that it’s head was hanging out a stable” while another wrote, “Aren’t those Fecking teeth horrendous”. [sic]

Stacey commented on top of a collage of the comments, writing:” Casually went on twitter and the Susan’s are out in full force” [sic].

She added: “I think every person on this thread just needs to…”

Then she shared a selection of hilarious videos of herself grinning widely with the song Smile by Nat King Cole blasting in the background.

She captioned one of the videos, writing: "Smile, my goodness there’s some mean, miserable people out there…”

Stacey continued: "Never let anyone stop you from smiling, in fact, use them as an excuse to smile and hopefully one day they'll be nice enough to have something to smile about. Love you all."

END_OF_DOCUMENT_TOKEN_TO_BE_REPLACED

END_OF_DOCUMENT_TOKEN_TO_BE_REPLACED
We and our partners use cookies on this site to improve our service, perform analytics, personalize advertising, measure advertising performance, and remember website preferences.Ok