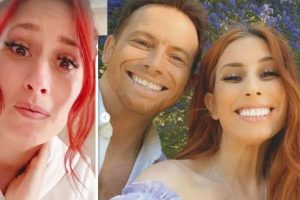 Tap to Tidy influencer Stacey Solomon has questioned where her fiancé Joe Swash has been sleeping as she returned to Pickle Cottage today after spending time away from her family home. The Loose Women panellist, 32, was left baffled at discovering that her and Joe’s bed look perfectly made, but despite being initially impressed by his bed-making abilities, Stacey was soon left wondering whether he had slept in it at all.

Have you just slept downstairs for two days to pretend you made the bed?

In view of her 5.1 million followers, the TV star documented her arrival back at her Essex-based home.

Stacey said: “We are finally home, sweet home!” she gushed.

She panned down to show baby Rose sitting in her car seat in front of her decorative spring-inspired front door.

“Just waiting for Daddy to answer the door,” she added.

Leaning down to baby Rose, Stacey said to the tot: “Say, come on Daddy! Come on Daddy!” before the little one cracked a smile and happily kicked her legs.

In the next story, Stacey revealed that she was in hers and Joe’s master suite.

Panning the pink and white room, the flame-haired star explained that she was gobsmacked at her beau’s efforts to keep the place tidy while she was away.

“I came upstairs and I was like, ‘Oh my gosh, babe, you’ve made the bed and actually made it so nice’.”

Walking towards her bed, Stacey captured the stunningly made king size bed which featured a tray with flowers and a candle, alongside pillows that had been expertly positioned on the duvet.

She continued: “I feel like everything I’ve been trying to teach him for years has finally paid off!”

However, the mother-of-four revealed that doubt soon started creeping in.

Stacey said: “And then I thought, ‘Hold on, it actually looks exactly how I made it before I left’.”

Panning the room, Stacey turned to Joe who could be seen holding baby Rose.

“Have you just slept downstairs for two days to pretend you made the bed?” she asked her fiancé.

Joe hit back: “No, I haven’t! Look, I kung-fu chopped the pillows!” he insisted.

Stacey replied: “Did you though?!” as Joe could be heard insisting he did, as the clip ended.

Addressing her followers in her next story, Stacey said: “None of you guys think Joe made this bed either, he definitely didn’t!

“Although I do feel like he might have chopped the pillows just to throw me off the scent, unless he had Mrs Hinch over while I was away!

“Soph have you been here chopping my pillows?!” she asked her friend, as she descended into giggles.

“Also, loads of you are asking why I don’t have a front door key, I do, I just don’t take it out with me.

“If I know Joe’s going to be home I won’t take my key just in case I lose it or something, I don’t know why I do that,” the video ended.