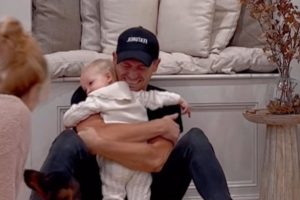 Stacey Solomon has shared the heartwarming moment that her husbandJoe Swash saw their daughter Rose walk unaided for the very first time.

After spending three weeks away from his family due to work commitments, former EastEnders starJoe recently reunited with his children in an emotional reunion at Pickle Cottage and has since been busy catching up with 11 month old Rose and her older brother Rex, three.

And during his time away, it appears that little tot Rose learned a new skill and took her very first steps without her doting dad being able to cheer her on in person.

But since returning home, 40 year old Joe has been able to watch his daughter run around freely, with Stacey, 32, sharing the intimate moment that Rose ran into her father’s arms for an especially big hug.

In the clip, Stacey can be seen holding Rose up before the little one confidently dashes off towards Joe, followed by her beloved dogs Teddy and Peanut.

After successfully making it across the room to her dad, Joe can be seen giving Rose a huge hug and gushing over the youngster’s milestone achievement.

Captioning the clip, Stacey explained that seeing Rose walk had “all happened so fast” but that finally watching her daughter run into Joe’s arms was the “best feeling ever”.

She wrote: “While Joe was away Rosey Posey learned something new [emoji] We waited for Joe to get home to show him.

“I felt so bad Joe being away but she just went from one day standing up & dancing on the spot, to taking a step or two to fully running around like there’s no tomorrow… it all happened so fast!”

She continued: “But it was the best feeling ever watching her run into daddy’s arms so excited to show him her new found freedom, I felt like I got to watch it twice seeing Joe get to experience that moment for the first time was just the best [emoji].

“I honestly can not get my head around the fact that she will be one next week. Time is flying by and our baby girl is growing so fast…”

“We love you our darling Rose, to the moon and stars and back again little pickle”.

Following the news, Stacey's friends and followers quickly took to her comments to share their own messages of congratulations.

The exciting updates from Pickle Cottage come after reports thatJoe’s work commitments had seen him do some filming as part of the I’m a Celebrity: All Star special in South Africa.

While the couple have yet to say where or what Joe was doing while away, the TV personalityhas been listed as one of the 15 rumoured contestants taking part in the ITV special.

Alongside Joe, other fan favourites lined up to appear on the 2023 show include Paul Burrell, Dean Gaffney and Gillian McKeith.