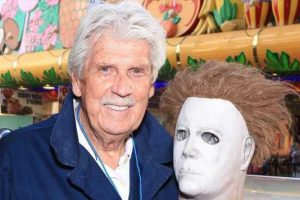 James Winburn is best known for his portrayal of Michael Myers in the 1978 horror classic Halloween. The actor and stuntman is understood to have died sometime over the weekend following an undisclosed health issue, The Sun reports.

Monopoly Events, the company behind UK Comic Cons, led tributes to the star on Twitter.

A spokesperson said: “We are extremely sad to learn of the passing of James Winburn, who joined us for [For The Love Of Horror] last month.

“James was an absolute pleasure to work and shared some amazing stories with everyone over the weekend. Our sincere condolences go out to his family, friends and fans.”

Devastated fans also took to the social media platform to pay their respects. Including Amber who penned: “So sad to hear about James Winburn.

“I only saw him a month ago at a [Comic Con] and it was a pleasure to hear him talk and see his joy when meeting his fans. RIP James.”

Robbie echoed: “Rest In Peace, James Winburn. He attended conventions up to his passing and valued the Halloween fans.

“I was supposed to meet him the other weekend, but his health prevented that. [Dr] Loomis shot him six times and he went on to live a honourable life. His spirit is at peace now.”

“Mr Winburn was a stunt man in the original 1978 Halloween and has been a wonderful person for fans to meet at conventions. He will be missed.”

His most iconic moment came when Michael Myers was shot six times by Dr. Samuel Loomis and fell over the balcony before mysteriously vanishing.

James went on to reprise his role as Michael Myers in the 1981 sequel, Halloween II.

His other credits include Magnum PI, Escape from New York, Colors, TRON and The Night Stalker.

It is understood that James was also a good friend of legendary filmmaker John Carpenter.