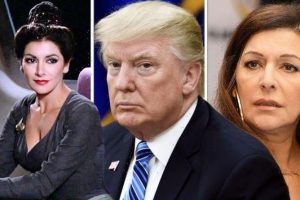 Marina Sirtis in Star Trek: The Next Generation season three

Marina Sirtis, who is best known for her role as Deanna Troi on the popular series Star Trek: The Next Generation, has addressed her disdain for the inflammatory rhetoric during Donald Trump’s presidency. His tenure as the 45th president of the United States began in 2017 and ended in January of this year.

The actress explained she “lived in a state of perpetual fury” during Trump’s presidency.

The Star Trek legend touched on the former Commander-In-Chief’s handling of Covid-19 and said she was left “angry” all of the time.

Throughout the pandemic, the US president had been accused of putting people in danger with false or confusing advice.

During a White House conference in August 2020, Trump shared his thoughts on masks.

At the time, he said: “My administration has a different approach, we have urged Americans to wear masks.

Addressing Trump’s presidency, Marina said: “I lived in a state of perpetual fury.

“I was just angry all the time at him and what he was doing. You ask someone to put their mask on and they spit in your face. What happened to America? Just the vileness.”

Joe Biden was officially sworn in as 46th President of the United States, ending Trump’s single term in office earlier this year.

Marina continued: “I was talking to Micahel Dorn [who played Worf] on the phone recently and he said, ‘I can tell you’re happy.’ I said, ‘How can you tell?’

“And he said, ‘It’s the first time in five years I haven’t had to hold the phone a yard away from my ear because of your yelling.”

Meanwhile, Marina returned to the UK after 30 years of living in America with her other half.

Speaking about her decision to return to Britain, she said: “I have to be honest. My husband dying had a lot to do with it. We were together for 31 years and married for 27 years. It was just too painful to stay.

“Too many memories. Everywhere I went there was a memory.”

She went on: “Also, four years of Trump did my head in. Because of the change in the American psyche – you would think that one man couldn’t have that much of an effect but he did.

“He changed the American psyche and not for the better. I just thought I don’t want to live here anymore.”

Marina continued: “I wanted to get back to my tribe. All of my best friends were still here.

“Although I had been there for over 30 years and my cast were fantastic and we’re best friends, my best girlfriends were here. Some of them I’ve known since I was 11 at grammar school so that’s a 55-year friendship.

“There’s no equivalent. You just can’t replace those. I wanted to be back where my heart was, really.”

Marina tied the knot with her husband Michael in 1992 and the pair were married for 27 years.

He sadly died in 2019 and the Star Trek actress decided to return to the UK.