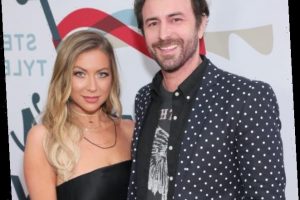 Now THIS is what we call a silver lining… and also an adorable one:

Just days after Stassi Schroeder was fired by Bravo due to a past of racially-insensitive behavior, the former reality star has confirmed that she’s expecting her first child with fiance Beau Clark.

To be clear, for accuracy’s sake, Stassi herself has not confirmed this blessed piece of news.

Instead, Us Weekly has reported on Schroeder’s pregnancy, writing on Saturday that Schroeder was seen out the day before picking up food with Clark — and rocking a long cardigan that covered a clear baby bump.

Yes, this is all we have to go on at the moment.

But the Stassi pregnancy news is out there for everyone to read on the aforementioned tabloid’s website, so it’s our job to convey is to our readers here as well.

If true, this means Stassi no longer has to wonder what she’ll be doing with the ample free time that has been allotted as a result of her ousting.

Bravo cut ties with the the veteran Vanderpump Rules cast member after remarks from 2018 resurfaced in which she and Kristen Doute reported fellow star Faith Stowers to the police for a crime she didn’t commit.

“Racially insensitive comments from my past have resurfaced,” Schroeder wrote via Instagram on Sunday, June 7.

“What I did to Faith was wrong. I apologize and I do not expect forgiveness.”

Max Boyens and Brett Caprioni were also let go by Bravo at the same time; also for their history of racist comments and messages.

But Stassi had been a lead star on the series for eight seasons and her firing has drawn the most attention over the past few days.

“Bravo and Evolution Media confirmed today that Stassi Schroeder, Kristen Doute, Max Boyens and Brett Caprioni will not be returning to Vanderpump Rules,” read a simply press release on Tuesday.

We’ve since heard that Schroeder is devastated by the development.

“Stassi and Kristen acknowledged what they did was wrong, have apologized and been punished,” Schroeder and Doute’s rep, Steve Honig, recently told People Magazine.

“Without casting aside their actions or the impact of those actions, they want to move forward as part of the solution in ways that are productive, meaningful and sincere.

“Both of them recognize actions speak louder than words and that is what will guide them as they move forward.”

TMZ, meanwhile, reports that the entirety of the reality star’s “Straight Up with Stassi LIVE” road show has been canceled in the wake of this scandal.

The tour had been based on Stassi’s podcast (which has also now been removed from all platforms) and had been a regular gig for Schroeder for about a year.

To her credit, at least, Schroeder has said all the right things in response to this controversy.

As part of her mea culpa this week, she said the following:

“I have grown significantly from the person I was then, and I am still filled with remorse and regret for the hurt I caused.

“I am grateful for the people in my life that continue to check me and push me to evolve into a more educated person.”

Schroeder and Clark got engaged in July of 2019, were set to air their upcoming wedding on season 9 of Vanderpump Rules … before she was fired.

While the couple originally planned to exchange vows in Italy in October 2020, Schroeder has since revealed that their the ceremony was being moved to Rome in October of 2021 due to the coronavirus.

If this holds, Clark and Schroeder will be joined on their big day by a tiny bundle of joy.

Congratulations to the happy twosome!