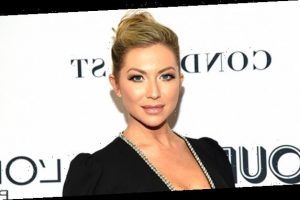 Stassi Schroeder threw on a sexy pair of heels with pajamas as she showed off her growing baby bump!

Stassi Schroeder, 32, just showed off her bare baby bump in a hilarious new post! Staying cozy in her matching beige colored pajamas, the Vanderpump Rules alum added a glam pair of black mule heels with crystal details. “Sex symbol right here,” she captioned the Friday, Oct. 2 post as she chowed down on a tasty chicken wing. With her blonde hair in a ponytail, Stassi looked absolutely gorgeous as she accessorized with a pair of simple diamond stud earrings.

“Literally thought this was Gigi Hadid,” friend Kaitlyn Bristowe — who is currently competing on Dancing With The Stars — wrote in the comments. Several other followers had the same thought! “Not going to lie I thought you were Gigi hadid at first,” another complimented, while a third gushed, “you’re glowing!”

Prayers for Baby Khaleesi! Stassi has shared a very personal and intimate moment in her pregnancy. It’s amazing to have the strength to speak out and possibly help someone who is going through a similar situation. Our hearts are with @stassischroeder and @thegoodthebadthebogie And that sweet, sweet baby girl. “My other favorite part of her nursery. After I bought this, we discovered she has a hole in her heart and it was the worst week of our lives waiting to find out just how serious it was. After a week of actual hell on earth, the doctors said it’s incredibly small & should heal on its own. This piece of art means so much more now. ❤️” #stassischroeder #beauclark #khaleesi #vanderpumprules #pumprules #vpr #sur #pump #rules #weho #vanderpump #babygirl #momma #momtobe

The Next Level Basic: The Definitive Basic B—- Handbook author has been regularly updating her 2.2 million followers on her pregnancy, recently confessing that her baby girl with Beau Clark, 40, has a health concern. “My other favorite part of her nursery,” she began a Instagram story caption, zooming in on a framed glittery heart with one piece breaking away. “After I bought this, we discovered she has a hole in her heart, and it was the worst week of our lives waiting to find out just how serious it was.”

Who would’ve thought we’d all be… sober at the same time.

Although the discovery was stressful, doctors had positive news for the couple. “After a week of actual hell on earth, the doctors said it’s incredibly small and should heal on its own,” she explained. “This piece of art means so much more now,” she concluded, adding a red heart emoji. What a relief.

Stassi confirmed that she was expecting her first child with fiancé Beau back in June, and since, it’s been raining babies amongst the Vanderpump Rules cast! Lala Kent, 30, is also expecting a baby girl with fiancé Randall Emmett, 49, and cast mates Brittany Cartwright, 31, and husband Jax Taylor, 41, are pregnant with a baby boy. The three pregnant gals posed for a photo at Brittany and Jax’s gender reveal party, which Stassi later posted to Instagram. “Who would’ve thought we’d all be… sober at the same time,” she hilariously captioned the photo.

END_OF_DOCUMENT_TOKEN_TO_BE_REPLACED

END_OF_DOCUMENT_TOKEN_TO_BE_REPLACED
We and our partners use cookies on this site to improve our service, perform analytics, personalize advertising, measure advertising performance, and remember website preferences.Ok