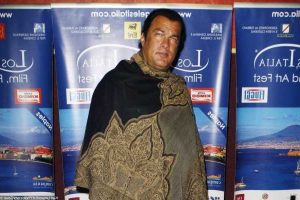 The actor, who is a big fan of Vladimir Putin, is photographed visiting a Russian-controlled jail in Olenivka, Ukraine that houses hundreds of Ukrainian prisoners despite ban on visiting the country.

AceShowbiz –Steven Seagal has visited a Russian jail in Ukraine amid the ongoing Russian invasion of Ukraine. The actor has been photographed at the Russian-controlled prison camp where 50 Ukrainian prisoners were recently killed.

Photos surfaced of Seagal standing inside the wrecked prison and sitting down on a bench examining some shrapnel. There is also a picture of the 70-year-old star talking to Ukrainian prisoners through metal bars.

The visit to the Russian-controlled jail in Olenivka, Ukraine came just days after an explosion killed at least 50 people there on July 29. The jail housed hundreds of Ukrainian prisoners at the time of the blast.

As if it’s not jarring enough, Seagal, who is a vocal supporter of Russian president Vladimir Putin, was banned from entering Ukraine for five years in 2017 after Putin gave him citizenship and personally handed him his Russian passport in 2016, after he vocally supported Russia’s annexation of Crimea. He has also praised Putin for being “one of the greatest world leaders, if not the greatest world leader, alive today.”

His support to Russia created controversy among Americans, who saw it as treachery to the United States. The “Hard to Kill” star relocated to Moscow after he was granted Russian citizenship while still retaining his American citizenship. In May 2018, he was appointed Russia’s special envoy to the U.S. He officially joined a Russian pro-Kremlin party in May 2021.

When Russia was planning an attack on Ukraine, the father of seven reportedly finalized the sale of his nearly 20-year-owned Northern California ranch. In February, he told Fox News of the war, “Most of us have friends and family in Russia and Ukraine.” He added, “I look at both as one family and really believe it is an outside entity spending huge sums of money on propaganda to provoke the two countries to be at odds with each other.”