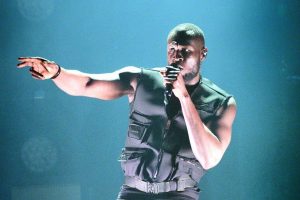 Stormzy has announced he is launching a football programme with Adidas for young people of black heritage to enhance and protect diverse representation in the sports industry.

Merky FC aims to affect change by addressing the lack of diversity off the pitch and providing access to multi-year, paid professional placements.

The collaboration also brings together 10 leading brands including Manchester United, Fulham FC and Sky Sports to form part of the careers programme that will commence in January 2023.

The rapper said: “Just 6.7% of senior roles in football are taken by someone who identifies as black or mixed black heritage. “We barely see any black team managers, coaches, sports presenters, assistants, ops managers, sales managers, accountants, marketing managers or physiotherapists – the list goes on, nor are many of us even aware of the vast roles available within the football industry.

“Through the #Merky FC initiative we hope to inspire real change within this field as part of my wider commitment to support racial equality in the UK.

“With the support of Adidas and the additional 10 partners, we will be in a position to aid the people who may have experienced disadvantages during their football career pathway. We strongly encourage other companies to join us in our mission.” Stormzy recently opened up in a BBC interview with the king of documentaries, Louis Theroux, telling the journalist about how an apprenticeship in Tipton changed his life.

He said: "The key thing happened when I was in Tipton, we were welding, I took off my hard hat and this was close to the time I got stabbed.

"At that time I had a long scar, like a T shape. And someone came along and asked what happened, and I said 'I got stabbed'.

"I just remembered all the looks on their faces, they were like 'what?' But I was like 'this isn't even that deep, man'. I was like an artefact in a museum, they were staring at me." He continued: "I will never forget. I was explaining 'I got stabbed here, there, there'. They had faces of horror and that's when it dawned on me.

The rapper also said that the apprenticeship allowed him to meet a range of people from across the UK.

He continued: "And then I was living with 17 other kids, and they were all white kids, from Scotland, Yorkshire, Newcastle. I had no idea about banter, about not taking yourself seriously.

"I came out of that, I realised I could take a joke, I realised there was another culture outside of my culture, and see another world."