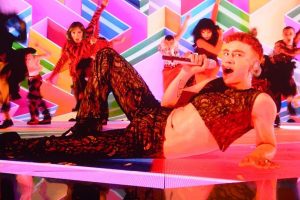 Olly Alexander is reportedly being headhunted by BBC bosses to join the line-up for Strictly Come Dancing.

The 30 year old, who recently shared a peak into his stylish east London flat, has gained popularity in the last year after joining the cast of It's A Sin and releasing his latest single Starstruck.

He also gave a stellar performance at The Brit Awards, where he was joined by Sir Elton John, 74, to sing The Pet Shop Boy's 1987 hit of the same name.

The pair made the most of the free stage and danced along to the song, which they collaborated on in support of the Elton John AIDS Foundation, with rainbow lights shining down on them throughout.

The show clearly caught the eye of Strictly Come Dancing producers as it appears they now want Olly to sign up for the programme this year.

An insider told The Sun Online: “Everyone wants a piece of Olly at the moment and the Beeb are no different.

“Strictly have Olly in their sights and have offered him a spot in this year’s line-up, should he wish to take part.

“Olly’s performance at The Brits with Elton showed he was an outstanding dancer as well as a singer and getting him onto this year’s series would be a huge coup."

The source added: “He is everything Strictly loves and given his enormous popularity with younger people, it could bring a new audience to the show.”

Fans were equally amazed by Olly and Elton's performance as they took to Twitter to voice their opinions, praising the music legends for using their talent for such a worthwhile cause.

One user wrote: “Feel sorry for anyone having to follow that Sir Elton John and Olly Alexander performance at the #brits2021 @BRITs. Unbeatable.”

Another agreed: “That Brit Awards performance by Olly Alexander and Elton John was f***ing beautiful, the best performance of the night for me already, no-one else can compare to that beauty.”

A third penned: “Best performance of the night has to be Elton John and Olly Alexander makes me want to watch it’s a sin again! @BRITs”.

A fourth added: “INCREDIBLE PERFORMANCE!! It made me emotional, the message was so powerfully put across with the music. Elton will always be a legend and I;m sure Olly will be too. I loved that!!”