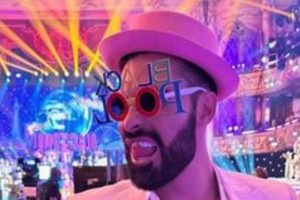 Some of the stars of Strictly Come Dancing, past and present, came together for a wild night of partying after the success of the Blackpool Strictly special.

This year's celebs including Helen Skelton, Hamza Yassin, Kym Marsh, Fleur East, Ellie Taylor, Tyler West, Molly Rainford and Will Mellor, danced their hearts out in the show, so it's no surprise that they were looking to let their hair down afterwards.

Former Strictly star Gemma Atkinson, who is in a relationship with Helen's pro partner Gorka Marquez was there for the Strictly special, along with other previous stars from the show, such as 2021 contestant John Whaite.

Steph McGovern and It Takes Two presenter Rylan Clark were also seen getting into the party spirit, with Rylan donning a hot pink top hat and wacky glasses that spelled out Blackpool.

The stars posted plenty of snaps from the night, with co-hosts Claudia Winkleman and Tess Daly sharing an excited photo from behind the scenes.

Gemma made sure to grab a few loved up selfies with her fiancé Gorka, as well as with another Strictly pro Giovanni Pernice.

She also shared a hilarious video of Giovanni putting on a Sleeping Beauty skit as he pretended to fall to the ground after "pricking" his finger on a bar spike used for spent cheques. The dancer then went on to repost it to his own Instagram Stories.

Head judge Shirley Ballas opted to skip the celebrations, as she was spotted looking low-key in a camel-coloured trench coat with her brunette hair wrapped up in a purple scarf as she clutched bags of Nandos, clearly ready for a feast after judging duties.

Gemma threw her support behind Gorka and Helen as they performed their quickstep, and she watched them on TV from her hotel room, before sharing a video of Helen, writing: "Sooo good".

She and Gorka, parents to three year old Mia, are currently planning their wedding, after getting engaged in February of 2021, and Gemma has previously spoken of how they're intending to keep it low-key.

Speaking to OK! , Gemma said: There have been a few times now where we’ve driven past a registry office and said, ‘Shall we just go in and do it? Yeah, let’s do it!’"

"We’ve not planned anything other than we know we want it really small and really intimate. We’ve agreed on just close family, a handful of friends, and a big party a week or so after. It’s just finding the time really. We’ve had lots of people saying, ‘You clearly don’t want to get married if you haven’t done it yet!'.

"But I think it’s because we’re so happy with how it is."