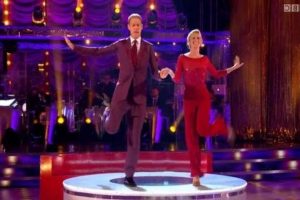 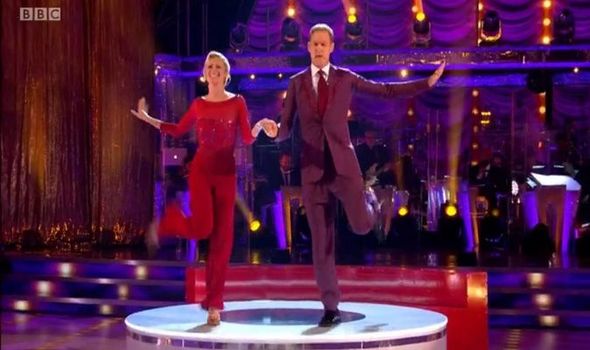 He explains: “I’m like, ‘come on, let’s all dance’. Then I go, ‘OK, I’ll go back to the kids’, or ‘I’ll look after the handbags’. I’d never actually got on a dancefloor in my whole life. “One of the reasons is that I feel like I’m too big, like if I started dancing I might elbow somebody in the ribs or smack someone in the face or something.” Dan added: “What I would love after all this is to be able to go to a wedding and shout, ‘clear the way, I’m coming through!’“

Just days later, the BBC Breakfast presenter put his insecurities aside and took to the most-watched dancefloor of them all, when he wowed viewers and impressed the judges with a fast-paced quickstep with professional partner Nadiya Bychkova last Saturday night.

As soon as the dance was over Dan, 44, collapsed on a sofa in the middle of the stage “more out of relief than anything else”.

“The number of people who asked me beforehand ‘can you dance?’, assuming I was rubbish, including myself… So the relief that I could do it half decently. I saw the red sofa and I thought, ‘oh, I think I’ll have a quick lie down.'” Dan puts his new-found confidence down to 32-year-old Nadiya, who is with him in the car as we speak on their way to rehearsals for this week’s show. One of the worries I had was that I was too tall and awkward,” he says.

“Nadiya’s amazing, she’s been brilliant in saying to me, ‘be as big as you can be, let’s use your size rather than it be something to worry about.’ Having said that, I did elbow her in the teeth this week.”

Nadiya says: “I always try to look on the positive side and so we’re embracing Dan’s size and working on it. When someone’s as tall as him they need to have more control and to work harder, but when they dance well it looks absolutely amazing.”

Dan’s transformation from big and clumsy to fast-footed and nimble didn’t start too well. Days before Strictly started, he was rushed to A&E after running straight into a glass door during training.

He remembers: “I flew back about two metres then landed on the floor. I thought I’d knocked my teeth out because there was blood pouring out of my mouth, but I’d actually bit a chunk out of my tongue.

“The next day I was feeling woozy so went to hospital to have a brain scan. They found I had mild concussion and I wasn’t allowed to dance for three days. I’ve still got a big lump on my head.” But devout Christian Dan believes his excruciating rendezvous with a glass door was meant to be – because it made him even closer to Nadiya, who he doesn’t stop gushing about throughout our interview.

“I always think things happen for a reason. I decided to go to A&E to get it checked, and this amazing lady [Nadiya] said, ‘you’re not going on your own’. We hadn’t been revealed [as partners] so we weren’t meant to be seen together, so she came with me and waited in the car for four hours outside.

“Afterwards I said to her, ‘that’s it, our friendship’s cemented, whatever you ask of me I’ll do.’ ” It’s certainly an unlikely friendship: the son of an evangelical Christian minister, Dan prays every day, never swears and refuses to work on Sundays.

Nadiya, on the other hand, is a stunning Slovenian dancer and Playboy model who often posts sizzling snaps on Instagram. Dan says: “We met each other just three weeks ago, but we already know an awful lot about each other.

“We talk about everything from faith to flapjacks to foxtrot. Whatever happens with this programme, I hope we’ll be friends for life.”

Dan, who began as a radio sports commentator before getting his BBC break on North West Tonight, admits he would never have considered Strictly if it wasn’t for his three children, aged 10, 12 and 14, with Sarah, his wife of 20 years.

He says: “Last Christmas my kids sat me down and said there are two programmes we’d love you to do: Saturday Mash-Up! and Strictly. I wanted to be a part of something they could really get into. My children are already loving the whole experience. They’re really caught up in it and loving the fact they’re friends are too.

“They never get to see me on BBC Breakfast, because we have a ‘no TV before school’ rule, so my programme is banned in our house.”

He went on: “My 14-year-old daughter was in the audience last weekend, she was the one who was worried about me embarrassing her. I looked up and I saw tears coming down her face, and she gave me this lovely little proud wave and mouthed, ‘well done, I love you’. I don’t think you can get much better than that, having a daughter who’s proud of her dad.”

Dan, who has continued to present BBC Breakfast on weekday mornings as well as The NFL Show on Fridays, despite his gruelling training, says he’s only getting around four hours of sleep a night – and that’s not the only discomfort.

“I try to keep fit, so the fitness part is no problem, but it’s using body muscles you’ve never used before. I discovered that I have an underactive backside, so my bottom’s been aching all week. Everyone at BBC Breakfast has noticed that my posture’s improved. They’ve had to adjust the camera because I sit up higher now. “I’ve also hired a sauna to try to get rid of my aches and pains at the end of the day. It’s on a month-long loan.”

And Dan says Strictly fans can expect something very different this week: “It’s a very serious and traumatic paso doble, so I’m trying to work on my annoyed, furious face.” Does he think he could go all the way?

He says: “I haven’t cleared any space for any glitter ball, let’s put it that way. But the best thing that has come out of this programme is meeting Nadiya. So I feel like I’ve already won.”