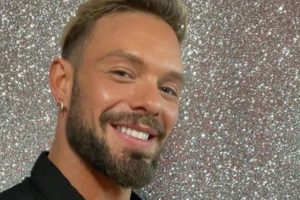 Strictly’s John Whaite has spoken about his nerves when joining the show and how he thought he might “drop out” of the series.

Ahead of the Strictly Come Dancing final on Saturday evening, John, 32, and his dance partner Johannes Radebe, 34, spoke to Claudia Winkleman on Radio 2 about their feelings towards being in the show’s final, with both admitting how nervous they were when joining the series back in September.

“So when you first arrived it was September, it was sunny outside, I’m just setting the scene, and you more than anyone, I think, if you don’t mind me saying, were the most nervous,” Claudia said.

“Oh, I was,” John agreed. “I thought maybe I would drop out, I would get too nervous, I would get overcome with emotion. John also gave a hint of what to expect from the couple’s dance in the final, saying he’ll be alone on stage at one point.

The former Great British Bake Off winner said: “Tonight I’ll be starting off the show on my own on-stage at one point and I would never have been able to do that in September and it really is remarkable. Remarkably unremarkable how subtle this transformation has been. And it’s all thanks to this beautiful chap here really.” Speaking to Johannes, Claudia then asked the dancer about his feelings towards being in the final, saying: “Johannes, this is your first final. Is it everything you thought it would be? What percentage of you is nerves and what is excitement?”

“There was nerves in the beginning, darling, there’s no nerves anymore,” Johannes said. “And I say that because we’re in the final, which is wild for me, because truth be told I didn’t think we were ever going to get here.

"That is why I went home on Saturday so I could continue choreographing for the week ahead, because I felt we needed to focus on what was going on right there in the moment.”

The couple have already made history as the first same-sex couple to feature on Strictly.

They will compete in tonight’s final against Giovanni Pernice and Rose Ayling-Ellis, after AJ Odudu and partner Kai Widdrington had to pull out due to AJ suffering an injury.

The Strictly final airs on BBC One tonight, Saturday 18 December, at 7pm.

Stay up to date with all the latest on your favourite stars by signing up to OK!'s daily celebrity newsletter.