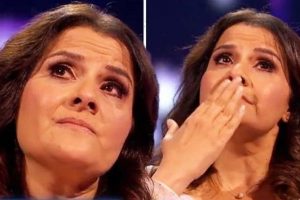 Nina competed to win money for her chosen charity, JDRF, which funds research to find a cure for type one diabetes.

After making it to the front seat, she had to get one more question correct to win the charity a whopping £50,000.

She was asked which British sitcom celebrated its 20-year anniversary this year, with the options: Father Ted, Gavin and Stacey and The Office.

As the pressure mounted, Nina looked flustered and began to cry.

Through her tears, the actress said: “It’s just such a… sorry, I’m getting a bit emotional because it’s just such a huge amount of money for charity. I just don’t want to get it wrong.”

Nina went with her gut and locked in The Office as her answer.

After a tense few moments, presenter Gary announced it was correct and Nina sobbed with happiness.

Following the show, the official Twitter account for JDRF said: “Amazing! Did you see Nina Wadia win £50,000 for JDRF on #SittingOnAFortune last night?

“Thank you @Nina_Wadia for this incredible gift to support type one research and for everything you do for JDRF and people living with type one diabetes.”

Nina candidly responded to the charity in view of her 45,500 followers today saying: “You do all the real hard work @JDRF. Let’s find that cure and change the lives of so many families all over the world!”

The soap star holds the charity close to her heart because her young son, Aidan, is a type one diabetic.

Type one diabetes causes the level of glucose in your blood to become too high, which happens when your body cannot produce enough insulin.

People with the condition must take insulin daily. If left untreated the excess sugar in the blood can cause severe damage including heart and kidney problems, blindness, nerve disease and circulation issues.

In worst cases, it can be fatal.

Nina’s appearance touched the hearts of viewers who have expressed their gratitude.

Claire Brabin tweeted: “Nina Wadia thank you so much for giving your £50,000 winnings from #SittingOnAFortune to help find a cure for T1 Diabetes.

“I got it when I was 11, it’s led to kidney failure, three transplants, a cardiac arrest and sight problems. It is an evil and destructive disease and needs to be cured.”

Nina replied to Claire: “I’m so sorry it has been so tough for you. JDRF and Diabetes UK are doing everything they can to find a cure and we get closer to it every year. Sending you strength and positivity.”

Samantha Muir echoed: “Well done Nina! Our 4 year old daughter was diagnosed with type one six weeks ago and every day we pray that one day there will be a cure.”

A user called the_lantus added: “@Nina_Wadia you did it!!! So so proud of you this will make such a difference to @JDRFUK hopefully one day find a cure!”