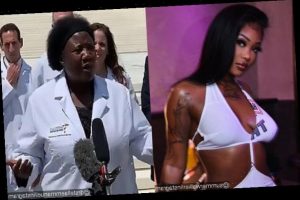 Dr. Stella Immanuel previously caused controversy by saying that the deadly virus could be cured with hydroxychloroquine and that face masks were not necessary.

AceShowbiz –Donald Trump‘s new backed doctor, Stella Immanuel, has recently become a trending topic due to several controversial comments she made, including one that stated Coronavirus could be cured with hydroxychloroquine. Many people have been criticizing the Houston doctor, but Summer Walker apparently is not among them.

In a post shared on her Finsta account, the “Girls Need Love” singer called Stella “an amazing doctor” who “stood w other doctors to spread this message as well about hydroxychloroquine. but it’s just being censored.” She added, “I can’t believe people still trust their government. They’re literally trying to kill you, scare you & feed off your negative energy.”

People naturally flooded her comment section with arguments, prompting Summer to share a disclaimer in a separate post. “Disclaimer: You don’t have to believe Dr. Stella Immanuel or Trump about what they think is a part of the cure but you should believe that your govt is trying to kill you,” she said.

She added, “There isn’t a disease they don’t already have a cure to, it just benefits them financially to sell you pharmaceuticals, vaccines and sometimes unnecessary surgical procedures.” Summer also made it clear that she is not a Trump supporter despite what she said.

Stella made headlines after she praised hydroxychloroquine and said that face masks are not necessary to stop transmission of the highly contagious coronavirus. Donald Trump showed his support to the doctor by retweeting her video, while her son, Donald Trump Jr., claimed that her video is a “must watch.” His Twitter account was suspended after that.

Most recently, Stella made a lot of people baffled with her comments about Alien DNA and the physical effect of having sex with witches and demons in one’s dream. She claimed that gynecological problems like cysts and endometriosis are in fact caused by people having sex in their dreams with demons and witches. In addition to that, Stella alleged that alien DNA is currently used in medical treatments, and that scientists are cooking up a vaccine to prevent people from being religious.