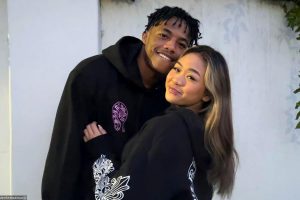 The 18-year-old, who is the first Hmong American to make the U.S. Olympic team, argues that people ‘support me when it’s beneficial for them never when it comes to my happiness.’

AceShowbiz -Not everyone is happy with Suni Lee‘s interracial relationship with Jaylin Smith. After one of her fans showed support for the two, the Olympic gold medalist divulged that she has “received so much hate” over their romance.

The 18-year-old got candid about her unpleasant experience when responding to a TikTok video shared on December 30, 2021 by user alixphom. In the clip, the individual was seen giving cute photo of the athlete and her beau a thumbs-up.

“I know that Sunisa will be judged by certain eyes in the Hmong Community because her man is Black,” alixphom penned in the caption. “LOVE is LOVE, no matter what race or gender you are. Keep doing you QUEEN.”

Taking to the comment section, Lee gushed, “This makes me so happy.” She then revealed, “I’ve received so much hate they support me when it’s beneficial for them never when it comes to my happiness. thank you!”

Lee went Instagram official with Smith in late December. At that time, she shared some photos of herself cuddling the football player as they wore matching black hoodies. She simply captioned the post with a white heart emoji.

While some people weren’t amused by the photos, many gushed over the lovebirds. One in particular was “The Bachelor” alum Kaitlyn Bristowe who exclaimed, “CUUUUUUTE.” Former “The Bachelorette” lead Matt James marveled, “Okayyyyyyyyy.”

This was not the first time Lee experienced racism. In November, the former “Dancing with the Stars” contestant disclosed that she became the victim of anti-Asian hate. She detailed the ordeal when speaking to PopSugar.

Lee shared that she was waiting for an Uber after a night out with her friends, who are all of Asian descent. However, they were startled by a car speeding by with people inside it hurling phrases like “ching chong” and “go back to where they came from.” She claimed one passenger even sprayed her arm with pepper spray before speeding off.