Home » Celebrities » Susanna Reid hits back at GMB outfit criticism ‘It didn’t look like that on the website!’ 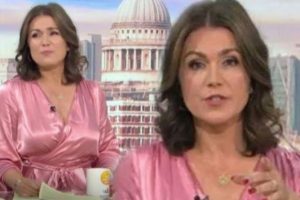 However, some viewers were far from impressed by Susanna’s dress, as they compared it to a dressing gown.

Another said: “Just throw Susanna a towel to save her blushes.”

But Susanna was quick to react to the remarks, taking to Instagram to address any confusion after coming off air.

She uploaded a collage of herself in the dress alongside one of M&S’ model posing in the gown.

Susanna’s fans immediately commented on the image as they agreed with her and commended her style.

One person wrote: “Susanna you looked great, personally I did not think it looked like a dressing gown.

“You are so lovely you can dress in anything and look great!”

Another Instagram user added: “You look great in it.

“Hope you have a great day stay safe.”

A third commenter said: “You wore it fabulously.”

One person confessed they “thought the same” when they saw her on screen but that she “sold it”.

Some viewers, however, were still unconvinced about the look and disagreed with the presenter.

One user wrote: “Looked as if you just woke up jumped a taxi into the show without changing.”

Another person chimed in: “Exactly what I thought when watching u [sic] this morning, so maybe try on camera first, look at footage and get changed!

“It was nice seeing Piers’ [Morgan] wife [Celia Walden] too.”

Someone else insisted: “Sorry but that looked like a dressing gown.”

Susanna frequently showcases her GMB outfits on her Instagram where she has garnered 574,000 followers.