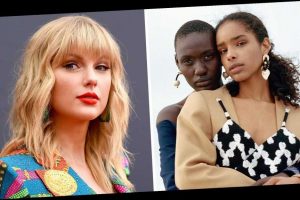 UPDATE, Jul. 30, 2:00 p.m.: Taylor Swift publicly responded to Amira Rasool in a Twitter thread following the publication of InStyle's interview with The Folklore CEO. "Amira, I admire the work you're doing and I'm happy to make a contribution to your company and to support the Black in Fashion Council (launching 8/3) with a donation," Swift wrote.

UPDATE, Jul. 28, 10:55 a.m.: Amira Rasool provided the following statement to InStyle following the changes made by Taylor Swift's team: "My lawyer Eric Ball at Fenwick & West has been in contact with Taylor’s manager Jay Schaudies since mid-day yesterday after they received our letter expressing concern over the merchandise on Taylor’s website. Taylor’s team took swift action to have ”the” removed from all merchandise. I commend her team for recognizing the damage it caused to our brand. I recognize that Taylor has been a strong advocate for women protecting their creative rights, so it was good to see her team is on the same page. It was a great first step and we are in conversation right now with Taylor’s team about the next steps to make this situation right.”

When Amira Rasool climbed out of bed on Friday morning, she did not expect to be riding into battle against Taylor Swift.

Soon, Rasool, founder and CEO of fashion e-tailer The Folklore, was deluged by online buzz about the award-winning singer-songwriter’s surprise quarantine album, folklore, which she had dropped at midnight to breathless anticipation and fanfare. Rasool didn’t think much of the record’s name. Plenty of things were named “Folklore,” she reasoned. Certainly she didn’t have monopoly on the term, which refers to the traditional stories, customs, and beliefs, typically passed by word of mouth, from one generation to the next. Even an email, sent to Rasool through The Folklore’s website, inquiring about a faulty digital download of Swift’s album, didn’t give Rasool much pause. It was a little strange but she shrugged it off.

Then a friend pointed Rasool to the folklore merchandise. There, on the front of a sweater or the sleeve of a hoodie was a logo she recognized. The typefaces were different. The Folklore uses a custom roman font; folklore an italicized script that invokes the record’s soporific, indie-folk atmosphere. But the word “the” on products emblazoned with “The folklore Album,” tipped on its side and affixed perpendicularly to the rest of the phrase, was the same design element Rasool had used since 2018, when she launched The Folklore to amplify underrepresented African and African diaspora designers.

Now Rasool was taken aback. She had been planning an in-house line that would put “The Folklore” logo front and center. Would people accuse her of copying Taylor Swift?

“Initially I was so shocked,” says Rasool, 24, a New Jersey native who now splits her time between Cape Town and New York City. “I'd heard of so many different Black women in particular who had been ripped off by large corporations by celebrities. And I just couldn't believe that it was happening to me.” Search for “The Folklore,” she says, and her site immediately pops up in the results. It’s an immediate hit on Google Images, too. “It’s just very hard to believe that [Swift’s team] didn't come across it,” Rasool says. “And if they did come across it — which I believe they did — for them to model Taylor’s merchandise on our logo, especially having seen what our company is about, is especially disheartening to me.”

A representative for Swift did not immediately respond to InStyle's request for comment. On Tuesday morning, however, the offending merch appears to have been removed from Swift's site. Apparel now reads: folklore Album.

The Folklore plumbs the talents of more than 30 brands, artists, and creatives, offering apparel, accessories, footwear and bags that the platform refers to as the “diversity of Africa’s contemporary urban landscapes and design aesthetic.” Beyond the online store, The Folklore also provides wholesale services to African brands seeking to mobilize the global market. “It’s not just about The Folklore and my feelings personally being hurt, but this is damaging to our brand,” Rasool says. “I had people who asked me, ‘Oh, did you collaborate with Taylor on these?’ They just assumed that it was a collaboration because of how similar the logos are.” It’s also possibly illegal — Rasool owns the active trademark for “The Folklore” on clothing.

She doesn’t blame Swift specifically. “Clearly Taylor didn’t find The Folklore and make this sketch,” she says. “But at the end of the day, Taylor is the one who’s profiting off of it. This is her team. So it’s up to her to make it right.”

Rasool, who is represented by Eric Ball from the law firm Fenwick & West, is leaving it to the legal teams to duke it out; she doesn’t have specifics to offer because she isn’t privy to the conversation. But she hopes Swift will be sympathetic to her situation. The hitmaker has thrown her unequivocal support behind the Black Lives Matter reckoning, tweeting in June that “in order for policies to change, we need to elect people who will fight against police brutality and racism of any kind” and posting a link to a Medium article by former President Barack Obama about tackling systemic anti-Blackness.

Swift regularly files trademarks for her own lyrics and slogans, and she doesn’t hesitate to sic her lawyers on infringers. She’s an avowed feminist, one who surely understands the social, political, and economic headwinds that stand between women — let alone Black women, who have to navigate both race and gender — and success. “And so I believe she understands why it's important,” Rasool says. “I just hope that [she] and her team will acknowledge that what they did was harmful to me and the brands that I represent and that we can come up with a great solution to make sure that everyone involved is given their proper credit.”

And what does Rasool, who says she has enjoyed Swift’s songs in the past, think of “Folklore’s” more pensive, gauzier turn?

“I haven’t listened to the album yet,” she says.