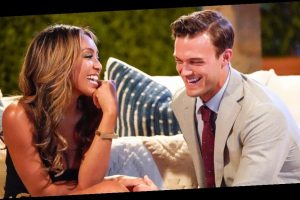 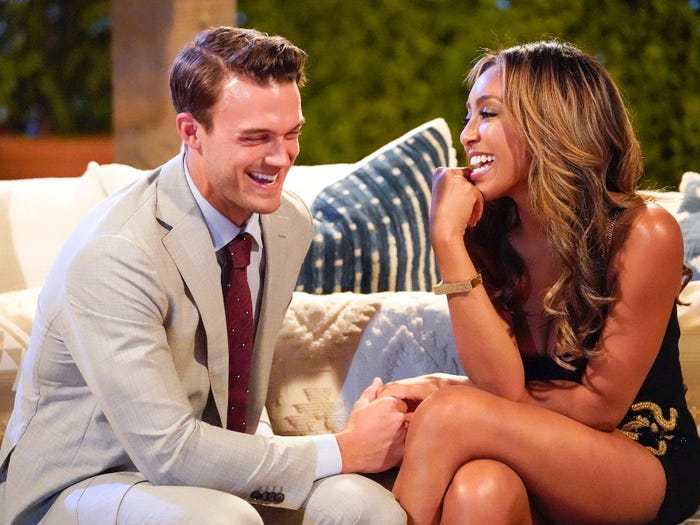 "Bachelorette" fans were in for a roller-coaster of emotions last week as multiple men opened up to Tayshia Adams about the struggles they had faced in their past.

But Adams told Insider that no one has surprised her more this season than Ben Smith, the 30-year-old Army veteran, who has become a fan-favorite.

"I think there were a lot of men that grew before my eyes and grew before their own," she said. "But Ben was someone that really surprised me."

Smith literally bared all during the date, disrobing so that he could "figuratively and literally let my guard down," he told Adams.

But the personal trainer revealed even more when he sat down with Adams at the cocktail party that night and revealed that he had an eating disorder for 15 years.

"The life I've lived is different than what you might assume," Smith said. "I found out what girls were when I was 15. I realized they don't like the fat kid. So I stopped eating. I started working out all the time, lost like 70 pounds, and had bulimia for 10 years when I was in my 20s. It's hard to hide something for so long. I kept it from everybody."

Smith said the only person who had known about the disorder was his sister.

"She saved my life," he continued. "I'm finally at a place now where I feel safe and comfortable with the people that I live and work with. I care a great deal about this. It's just hard for me to let it out."

Adams told Insider that she eventually realized why Smith was so guarded during their filming; it's because he was carrying this big secret, she recalled.

"The things he was trying to not bring to the surface, they were big conversations, and I think that's why he was holding back so much," Adams added. "I think once he finally opened up, it was just a completely different person. It was like a weight had been lifted off his shoulders."

"It did take us a hot minute to get there," she continued. "I knew there was so much more to him."

Adams said that she believes the pandemic may have played a part in her contestants' willingness to open up this season on "The Bachelorette."

"2020 could definitely have been a reason for all that," she said. "Not having human interaction for quite some time does take a toll and I think there's a need and a want to find love and interact with people and just to be vulnerable. And I think maybe they felt safe enough to open up and talk about it with me, which is great."

During the season, the contestants have opened up about many tough issues, including drug addiction, absent parents and even the Black Lives Matter movement.

"Those are real conversations. Those are real things that people face every day," she added. "And the fact that we're openly talking about it, I think it's amazing…People are putting those walls down."

And Adams revealed that viewers can expect even more personal revelations from the men in Tuesday night's episode.

END_OF_DOCUMENT_TOKEN_TO_BE_REPLACED

END_OF_DOCUMENT_TOKEN_TO_BE_REPLACED
We and our partners use cookies on this site to improve our service, perform analytics, personalize advertising, measure advertising performance, and remember website preferences.Ok