Home » Celebrities » Tayshia Adams Shuts Down False Claims About Her Priorities: "Maybe Applaud Me for Not Settling"

Tayshia Adams Shuts Down False Claims About Her Priorities: "Maybe Applaud Me for Not Settling" 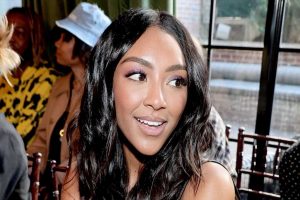 Tayshia Adams hit the comments of a recent Instagram post to shut down rude/inaccurate claims about her priorities—pointing out that she is “waiting to be in a healthy supportive relationship while simultaneously being a successful woman.”

Tayshia (who split up with her Bachelorette winner Zac Clark in November 2021) responded to an Instagram commenter who claimed she was taking a “detour from wanting to be married and starting a family,” saying that this simply isn’t true and that it’s possible to want more than one thing.

“Did I take a detour or am I just living and enjoying my life in its current season?” she said in a comment captured by @bachelornation.scoop and Us Weekly. “I still want marriage and to start a family more than anything so what I BELIEVE you meant in referring to what I ‘realized’ is actually — waiting to be in a healthy supportive relationship while simultaneously being a successful woman; a cohesive unit, not one or the other.”

She added, “I think some of you fail to remember that I stated this at the very beginning of my journey. I want to build an empire, I want to go after my dreams and I want my partner to be supportive of that as they follow their own dreams as well. I want a relationship where we can cheer each other on. None of that has changed.”

Tayshia also noted that the comment was pretty rude, saying “So before you confuse the fact that I’m in the wrong for focusing on my career solo rather than with someone by my side and not ‘wanting to be married or start a family,’ which is not for everyone (which is incredibly rude to say BTW) maybe applaud me for not settling, staying true to myself, going after my dreams and working on myself in the interim to be the best version of me for the right person.”