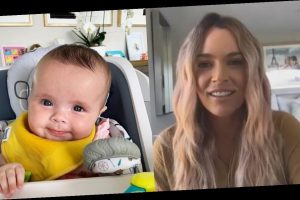 The Real Housewives of Beverly Hills star Teddi Mellencamp is opening up about the “complete shock” of taking her 5-month-old daughter, Dove, for a standard medical checkup, only to find out she needs surgery. The baby girl will go under the knife on Wednesday for a rare deformity which is dangerously affecting the growth of her head and brain.

In an exclusive interview with ET’s Brice Sander, Mellencamp, 39, shared how she was feeling just days away from the daunting procedure.

“I’m really emotional about it,” she says. “All I care about is that Dove is happy, feeling good, safe and protected and I’m going to do my very best as her mother to make sure that I’m there to support her 100 percent. But leading up to it, it’s scary.”

Mellencamp took Dove, whom she welcomed with husband Edwin Arroyave in February, for a standard medical checkup earlier in July and was referred to a neurosurgeon, who diagnosed Dove with lambdoid craniosynostosis, leaving the family in “complete shock.”

Mellencamp said the rare condition is related to sutures in Dove’s skull which fused before she was born when they shouldn’t have, subsequently causing her head to grow abnormally. “The fact that it happened in utero with her means that she doesn’t have room for her brain to grow, so if we didn’t catch it when we did, it would’ve continued growing,” she explains.

“We’re really lucky that we caught it as early as we did and that we have the opportunity for her to have the surgery at such a quick turnaround because hospitals are crazy right now,” she adds. “They’re so jam-packed. I’m scared and have all of those mom nerves, but I’m also really grateful and happy that we can do this.”

Completely caught “off guard” by the diagnosis, the family now has to deal with facing major surgery in the middle of the coronavirus pandemic, which means Mellencamp’s husband will be with Dove on the day of the surgery. Mellencamp will then take over for around six days due to only one person being permitted to stay at the hospital with Dove afterward.

Mellencamp says that since sharing the news on social media recently, her nerves have been somewhat eased by the encouraging and inspiring stories she has heard from others who have experience with similar surgery. “So many other mothers [shared stories] or even adults [who] had it when they were kids [told] their recovery stories. It really made us feel good, like, ‘Wow, we’re not alone in this and she’s going to be OK.’”

Dealing with anxiety, especially when in the “public eye,” isn’t easy; and going into July it’s at an all-time high. I was torn as to whether I should share this information, but as someone who tries to be as transparent as possible, and knowing I have a platform to reach others in similar situations, I would like to update you all. Our sweet baby Dove was diagnosed with Lambdoid Craniosynostosis and has to undergo neurosurgery at the end of the month. We are so grateful to have an amazing team of doctors and surgeons who have caught this early and will be working on her. Originally, like Cruz before her, we thought Dove had Torticollis and would likely need a doc band for re-shaping. Instead a CT scan showed Lambdoid Craniosynostosis (Lambdoid craniosynostosis is a very rare type of non-syndromic craniosynostosis and occurs when one of the lambdoid sutures at the back of the head fuses before birth). The recovery is about a week in the hospital and a couple weeks at home with a very high success rate. So although we are filled with nerves as neurosurgery sounds scary, we have our faith that she will be ok. Please keep baby Dove in your prayers and if you have had a child with this same surgery, please let me know below, as I would love any additional insight and support. Sending 💕 to you all.

While she knows Dove’s recovery from surgery is going to “be tough,” — telling a fan on Instagram that Dove will likely need to wear a helmet for a year — Mellencamp says it will be “so worth it.”

The mom-of-three was also recently reminded of how resilient children can be through another family health scare — after her daughter, Slate, jammed her finger in the door.

“I thought she was going to be fine because she didn’t even cry, but it was because she was in shock,” Mellencamp explains. “She had amputated the tip of her finger and had to have a couple of surgeries and if anything, she taught me so much because kids are so resilient. She learned how to write with her left hand, she finished off Zoom school, she told me how great it was because we got to spend more time together because she got to sleep in my room for those weeks while she was recovering.”

“I’m like, ‘You know what? I need to learn from her,’” Mellencamp adds. “She’s so positive all the time no matter what’s going on. One night, she looked at me and could tell it was weighing on me and goes, ‘Hey, Mom, I just want you to know this isn’t your fault.’ And I was like [pretends to cry] because you just have mom guilt, like, ‘Maybe if I wouldn’t have taken the trash out at that time, [she wouldn’t have gotten injured.]  I’m really grateful she’s healing and her skin graph surgery worked and now she’s pretty much back to her usual activities.”

See more on Mellencamp, and the latest on The Real Housewives of Beverly Hills below.