Home » Celebrities » The 7 Stages of Dating a Kardashian

The 7 Stages of Dating a Kardashian 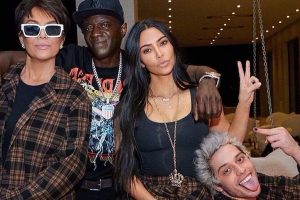 Kim Kardashian came dangerously close to breaking the internet for a second time last week with her public confirmation that she's now dating Pete Davidson… or at least intermittently holding hands with him. This revelation only served to intensify the public's profound bewilderment over the SNL comedian's ability to seemingly land any A-list lady he sets his sights on. But dating someone on Kim's level of notoriety also means getting used to an entirely different level of tabloid scrutiny, even for the man who inspired Ariana Grande to write "thank u, next."

In fact, romancing an A-list pop star is merely amateur hour compared to the feats of strength it takes to navigate the media gauntlet that is becoming the latest person to start casually seeing a member of the Kardashian-Jenner family. But thankfully, the reality stars have a pretty regimented rollout plan for how they introduce all new boyfriends to the masses, which makes this process slightly less painful for all those involved, while optimizing for headline-grabbing opportunities, of course.

Ahead, the seven stages of dating a Kardashian. Not one to dawdle, young Davidson's already at step three.

The first time a rumor drops that one of these sisters is dating another notable public figure, the intended effect is a worldwide social media shock and awe campaign. Once the initial impact of the announcement begins to subside, that's when the media outlets will get barraged with source quotes and rumors proclaiming that these two stars have both finally found happiness, while the family remains completely tight-lipped on the subject. Although, as the weeks go on, you might start to notice that those "close friends of the family" talking to the press seem to possess some oddly personal insights into the nature of this fledgling relationship.

Just as the rumors start to die down and the public loses hope there will ever be an official confirmation, the family gives us our first hint that this love connection might be more than just hearsay. It's never anything definitive, just enough to suggest that something more romantic is transpiring behind the scenes. Kanye set the bar for this stage of Kardashian courtship by name-dropping Kim in his song "Cold," while Pete Davidison used the gossip about them as the premise for a punchline on Late Night with Seth Meyers, and both Kourtney and Travis Barker and Kendall and Devin Booker teased their relationships for weeks via flirtatious Instagram comments before going public.

The integration of the new boyfriend into a Kardashian's social media content always begins with the utmost subtlety and tact. This is their primary place of business, after all. First comes the soft launch on Instagram Stories, usually with a mysterious shot of a man's body part, a cryptic song lyric, or near-identical photos of the same multi-million dollar vista shared on both of their accounts simultaneously. But all of this is really just prelude leading up to the big boyfriend reveal on the grid with a post that makes it unequivocally clear that this relationship is really happening. Kourtney and Travis confirmed the news with a post-Valentine's Day handhold, as did Kendall and Devin, while Kim and Pete opted for the slightly less romantic choice of making their couple debut on Flavor Flav's Instagram, posing alongside Kim's mom in matching Skims pajamas.

With the excitement from the announcement of a new relationship also comes the paparazzi's excitement to document it from every possible angle. And they wouldn't be the First Family of reality TV if they didn't make the absolute most out of this high-interest moment. What the PDA entails exactly doesn't matter quite so much as the fact that it's being captured for posterity. So whether it's an incredibly brief handhold on the walk from the car, a nonchalant butt squeeze, a victorious courtside kiss, or a makeout session on a gondola in Venice, all of the above will do the job nicely.

You know a Kardashian is serious about her man when she starts doing free promotion on his behalf. Thanks to Kim's third marriage, her entire family will likely never be free of the hold Yeezy has over their wardrobes. Likewise, Kylie can regularly be spotted dressed in Travis Scott's merch and in the VIP section at his shows, Khloé and Kendall have both been regularly photographed in their respective boyfriends' basketball jerseys, and Kourtney even posted a selfie in a sweatshirt from Travis Barker's CBD company. But it's not just the ladies who are representing on behalf of their men. In both their Instagram and public debut, Pete wore pieces from the latest Skims unisex collection, while Scott created an Astroworld-themed Kylie Lip Kit for his 2019 "Wish You Were Here" tour, and Kanye is still overseeing the KKW Beauty rebrand despite their divorce. It seems only a matter of time before Barker starts penning posts for Poosh.

A relationship it's the real deal in this family until the happy couple poses together on the cover of a national publication. The joint fashion magazine cover is the highest honor that can be bestowed on any Kardashian partner. The agreement to share this coveted position communicates an even greater commitment than marriage in that these women — who could have just as easily shot the cover alone — are gamely agreeing to symbolically hitch their wagon to this other person's star. It's no longer just a collaboration, but a total merger of their individual celebrity brands.

Unfortunately, the good times can't go on forever. After all, what kind of programming would that make for their new Hulu series? So after roughly one year of dating, the engagement and pregnancy rumors typically begin, headlines that herald either the arrival of a fresh reality TV narrative or the death knell of a relationship. Because in order to keep the ouroboros of Kardashian-Jenner press churning along, either one of those rumors needs to be true or it's time to move on to greener pastures, and a whole new post-breakup news cycle to mine for content.