Home » Celebrities » The Bachelor Week 7 Preview: The Weak Get Cut!

The Bachelor Week 7 Preview: The Weak Get Cut! 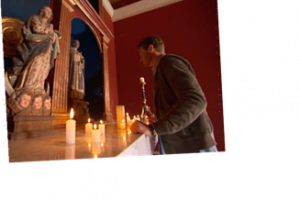 If you’re weak, you’re not gonna last. The weak get cut.

So says one of the six remaining suitors on The Bachelor Season 24 this coming Monday night, as Peter Weber is forced to confront the possible truth about one of the women and send even more packing.

But not before he…

… and goes to a church to pray.

All of these scenes and many others are featured in the trailer we’ve uploaded here.

Weber will also be very torn over which contestants to keep around and which to sever ties with, as we hear him utter the following words to/about different women at various points in the trailer:

You made me so frickin happy. It’s insane.

I’m definitely falling in love with her.

Is Victoria Fuller one of these women, though? That’s perhaps the main question viewers have heading into next week’s new installment.

Just a few days ago, Peter admitted to Victoria that he wasn’t sure he could continue on with her, considerirng some of the rumors floating around about her and the hesitance she showed in opening up on air.

But Victoria insisted that she was on the show for the right reasons.

And that was all it took for her to earn a rose.

However, in a conversation from this preview, Peter says he’s having some “doubts” about this potential wife, prompting Fuller to break down and, later, another aspiring fiancee to trash her as a “bitch.”

What about Hannah Ann, Kelley, Natasha, Kelsey and Madison?

Which of these women will earn hometown dates?

Will any earn a proposal down the line?

Will any end up as The Bachelorette? Almost definitely, right?

Consider yourself warned about potential The Bachelor spoilers and check out this official ABC trailer now.

And then sound off:

Is all the drama on this season fun and exciting… or clearly scripted and annoying?