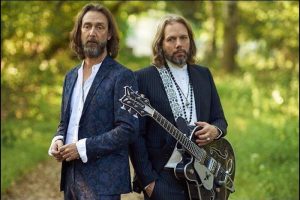 The Black Crowes have announced that they will release a new collection of covers, titled 1972.

The EP will be available digitally on May 4 as an Amazon Music exclusive. Vinyl and CD editions will be out on May 6 via the Black Crowes’ Silver Arrow label.

The project will mark a celebration of the 50th anniversary of some of the best rock-and-roll songs, including The Temptations‘ “Papa Was A Rollin’ Stone,” which was released along with the announcement of the EP.

The Black Crowes recorded the six-track 1972 EP at the iconic Sunset Sound studio in Los Angeles in January.

“The year 1972 was a watershed moment, some of the greatest rock and roll songs ever made came out of that year. To get our band back together in the studio, it had to be a celebration of rock and roll,” said The Black Crowes’ Chris Robinson. “This record is about love and devotion to something that makes us feel good. We hope that it makes fans around the world feel the same.”

The album will feature covers of The Rolling Stones‘ “Rocks Off,” Rod Stewart‘s “You Wear It Well,” Little Feat‘s “Easy To Slip,” “The Slider” by T-Rex and “Moonage Daydream” along with the aforementioned cover of “Papa Was A Rollin’ Stone.”

A press release from Stephen Brower, the global co-head of artist relations for Amazon Music, reads, “To work with [The Black Crowes] to re-visit 1972, a truly magical year in music, was an absolute thrill. I can’t imagine another band having the skill and the swagger to take on these songs and pull it off so spectacularly.”