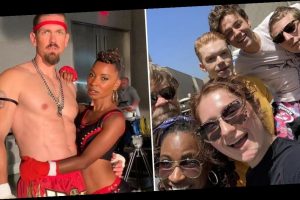 The Gallagher family has had its fair share of ups and downs, but the cast of Shameless has been through it together. Fresh off the news of the Showtime series being renewed for an 11th and final season, we’re taking a look back at all the adorable moments the cast members have shared together off the screen. In Southie, the group is constantly cleaning up after Frank’s (William H. Macy’s) latest sh*tstorm, but in real life, they’re close friends who’ve been hanging out since 2011 and taking a lot of selfies. We’re talking birthday parties, red carpet appearances, and even workouts together — the cast of Shameless is just as much of a family in real life as it is in the Showtime series. See some of the cast’s best photos together ahead.

END_OF_DOCUMENT_TOKEN_TO_BE_REPLACED

END_OF_DOCUMENT_TOKEN_TO_BE_REPLACED
We and our partners use cookies on this site to improve our service, perform analytics, personalize advertising, measure advertising performance, and remember website preferences.Ok