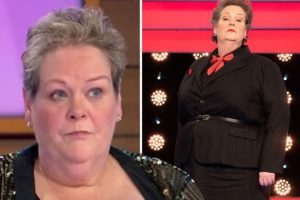 The Chase: Anne Hegerty takes dig at Bradley about his jokes

Anne Hegerty said she discovered a number of tweets from fans who believed she had died back in 2016. The rumour began following the death of a horse named The Govaness, pronounced just like her nickname on The Chase.

The 63-year-old quizmaster addressed the situation when asked about a similar situation with Bradley Walsh.

The Chase host was mistaken for Trainspotting actor Bradley Welsh who died back in 2019.

At the time, fans flocked to Twitter assuming it was the much loved presenter.

Anne said she didn’t recall seeing the rumours about her co-star at the time, but had discovered ones about her.

“I’ve seen ones that I’m dead,” she spilled.

“I think what happened was there was a horse, I imagine it was a Scottish horse, that was called the Govaness.

“I don’t know if it was named after me or not, but anyway, it died or it was put down or something.

“Somebody posted on Twitter, ‘RIP the Govaness’, spelt like the horse and some people got the idea that it was me.

The seven-year-old mare Anne is referring to was put down at Cheltenham Festival in 2016.

The quizmaster has been known by her alter ego on the quiz show since 2010.

She is also a chaser on the Australian version with Mark Labbett, aka The Beast.

The presenter has said being on The Chase will always be the biggest thing she has done.

In the same chat with Michael Fenton Stevens on his My Time Capsule podcast, she credited Bradley for making the show what it is.

Earlier this year, he sparked a frenzy by revealing he was ready to retire in two years.

She said of his comments: “I think this was Brad just talking off the cuff.

“I don’t think he has any plans to retire.

“I think he just meant, ‘Obviously I can’t go on forever but who knows when I might not be able to go on until’.”

On a potential replacement, she added: “I can’t imagine who else could do it.”

The Chase continues tonight at 5pm on ITV.