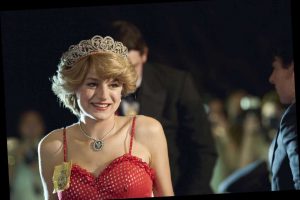 Emma Corrin made her impeccable debut on The Crown as Princess Diana this season, and yes, she’s just as curious about what the royals think of the show as we are. Speaking to GQ, Emma said she’s interested to know what Prince William and Prince Harry in particular think about the new season—but understands that it might be a sensitive subject.

“I can’t imagine,” she said. “I’m not going to say it doesn’t matter, because that would be ignorant. If someone made a programme about my grandma, who died last year, that would be difficult for me to watch […] I’d be interested to know what they think.”

She also joked that, “If I ever saw them at a party, I’d probably leave!”

This Season of The Crown goes deep into the royal family’s less-than-kind treatment of Princess Diana during the early days of her marriage to Prince Charles, and the royal family are reportedly less than thrilled already.

A source tells Vanity Fair’s Katie Nicholl that “The Queen has no desire to watch herself in a fictitious TV program” and “Anne has no time for such nonsense,” while insiders told The Daily Mail that Prince William “feels that both his parents are being exploited and being presented in a false, simplistic way to make money.”

That said, the royals typically don’t speak out publicly about such things, so don’t expect anyone to actually go on record about their reaction to the show!