It was the Oscars’ most stunning performance. Bradley Cooper and Lady Gaga, nestled side-by-side behind a piano, emotionally locked in on a rendition of A Star is Born's Oscar-winning anthem, Shallow. 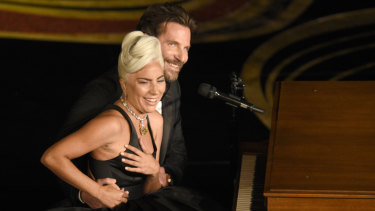 Lady Gaga and Bradley Cooper performed too intensely for some at the Oscars.Credit:AP

It's understandable. This is a world where the goofy guy from Celebrity Apprentice was voted into the US presidency, a world where people harass movie critics for wrecking the Rotten Tomatoes score on the latest superhero movie, a world of Riverdale teleplays. We're in the Dumb Times.

It's perhaps telling of today's cultural sophistication, then, that the go-to response after such a genuine performance would be to speculate on its actors' sex lives. What's so hard to understand? They're performers, and they were performing. Did these people think A Star is Born was a documentary?

Such nutty commentary might be expected from a generation raised on shipping fantasies, all those pop culture fanatics who demanded a Scully and Mulder romance, Kate and Leo, Harry and Hermione, Bughead and Veggie (again, Riverdale; I never said I don't watch it). But even celebrities, who should perhaps understand the necessary sheen of verisimilitude that goes into glitzy Hollywood performances, were pushing the same angle.

Spice Girl Mel B took to British TV to say she "felt uncomfortable for Bradley's girlfriend", the Russian supermodel Irina Shayk, and suggested Gaga may have broken a "women's code". "Is there any chance these two aren't f—ing?" went a viral quip from comedian David Spade that was quickly picked up as a source for investigation by tabloid reporters.

Within hours, headlines suggested Cooper and Shayk's relationship was on the rocks, and that Cooper may be to blame for the sudden end to Gaga's engagement to Christian Carino earlier this month. Shayk unfollowed Gaga on Instagram following the performance, reported The Sun, a line I just typed with incredible shame, even though she was shown hugging and congratulating the singer immediately after the duet.

Fortunately, there has been some sense amid the ridiculous drama – oddly enough, from actress Jennifer Esposito, Bradley Cooper's ex, who was forced to explain a much pored-over "ha!" reply left on Spade's Twitter post.

"I didn't watch the Oscars, I don't know what went on, I don't care what went on; I commented on something that I thought was funny and someone being bold enough to say what he said, and I laughed," she explained in a video posted online. "To find that people are making judgment calls about me or the people that the comment was about is really psychotic. It's psychotic! Like, what are you doing with your day?

"This is horrible behaviour," she added, shooting an expletive at a Page Six reporter who spun a whole back-story from the two-letter missive. "I feel bad for you if you took time to comment on such insanity."

It's all quite disheartening, especially since the lingering gossip has awkwardly distracted from what was the Oscars' best moment – not to mention the ceremony's other highlight, that moment when a triumphant Spike Lee, claiming his first Oscars win, jubilantly wrapped his legs around Samuel L. Jackson's torso. Hmm, get a reporter on it, I think there's something there.