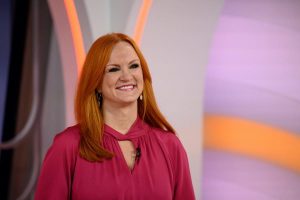 Ree Drummond takes a traditional apple pie to new levels with a recipe she said has lots of “naughty goodness.” The Pioneer Woman star makes her foolproof crust and piles in a delicious apple filling, then tops the pie with an easy crumble.

Drummond wrote about her dreamy apple pie recipe in an October blog post on The Pioneer Woman website. “I’m starting off with utterly decadent apple pie, made ultra rich and dreamy with the addition of cream and all sorts of sugary, naughty goodness,” she wrote.

Drummond added, “Try it for Thanksgiving this year and be sure to serve it with a big dollop of hard sauce, which we made here yesterday. Hard sauce on warm apple pie could cure the world’s ills, let me tell you.”

To begin, Drummond made an easy “no-fail” pie crust by first pulsing together flour and shortening in a food processor. She placed the mixture in a bowl, added ice water, vinegar, and a beaten egg, then stirred everything together gently.

The Pioneer Woman star split the dough in half, made two discs, and placed each in a Ziploc bag. She put the dough in the freezer until needed. “If you’re using the pie dough right away, you still need to freeze it for a good 20 to 30 minutes, so it’ll be firm enough to roll out and work with,” she explained.

For “one of the best apple pies in the world,” Drummond peeled and cored Granny Smith apples then sliced them. “Now we’re going to mix up the creamy dream concoction for the apples,” she wrote in her blog post.

In a bowl, Drummond mixed together white and brown sugar, heavy cream, vanilla, cinnamon, and flour. Then she poured the mixture over the apples and stirred everything together.

On a floured surface, Drummond rolled the dough into a circle. “It takes finessing, fiddling, and patience,” she noted. “Take the disc of dough out of the plastic bag. Put it on the floured surface. Sprinkle flour on top. Roll a couple of times.”

She shared that more flouring and rolling are required and little imperfections are easily fixed. “The dough will crack and freak out,” Drummond explained. “Push edges in with the palms of your hands, pushing them in to form a perfect circle.”

Once the dough was rolled into a large circle, the Food Network host loosened the dough from the surface and transferred it to a pie pan. She trimmed any excess then crimped the edges.

Drummond piled the apples into the crust and made an easy crumble topping. She put butter, flour, brown sugar, pecans, and a dash of salt in a food processor and pulsed the mixture until it formed clumps.

The Pioneer Woman star sprinkled the crumble over the top of the pie and placed aluminum foil around the crust to prevent it “from getting too brown too fast.” She baked the pie in a 375 degree Fahrenheit oven for one hour.

Drummond served the pie with hard sauce, which she explained in another post on The Pioneer Woman website, “is a scrumptious delight meant to be plopped on top of warm pies, puddings, cobblers, and crisps. The booze is what makes it extra delicious.”

She noted, “It has a butter base, so when it hits the warm dessert, it takes its own sweet time melting and running down the sides of whatever the dessert happens to be. It’s absolutely out of this world.”