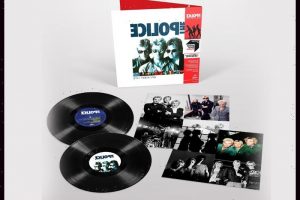 On April 15, The Police‘s Greatest Hits album will be reissued on vinyl via UMe/Polydor in celebration of the 30th anniversary of the original release.

Remastered at Abbey Road and cut at ‘half-speed’ for ultimate sound quality, the set contains two heavyweight black LPs with expanded artwork and packaging in a bespoke gatefold sleeve which enhances the original artwork.

A multi-platinum selling global smash on CD, Greatest Hits had a limited vinyl release upon its original release in 1992 that has long been out of print. The new collection is available to pre-order at https://ThePolice.lnk.to/TheGreatestHits.

Side B
Walking On The Moon
The Bed’s Too Big Without You
Don’t Stand So Close To Me
De Do Do Do, De Da Da Da